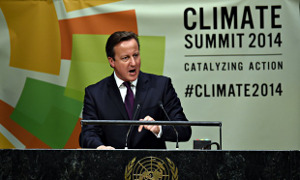 Existing coal-fired power plants in the UK are to be phased out within 10-15 years and new-build plants will be required to install carbon capture and storage (CCS) technologies, the prime minister’s office has announced.

David Cameron’s office made the announcement in a tweet from the UN climate summit in New York. In his speech to the summit, however, Cameron (pictured) did not mention the phase-out plan, an omission noted by green groups.

In a statement, Greenpeace UK’s Louise Hutchins commented: “The pledge to end dirty coal that David Cameron seems to have casually dropped from his summit speech wasn’t just a footnote but the keystone of any serious policy to clean up Britain’s energy system. Cameron should use the next available opportunity to finally announce a clear expiry date for our polluting old coal plants.”

While the UK government has not explicitly announced the phase-out policy before, and has not previously stated a position on coal-based power, the phase-out seems to be happening by default due to the EU’s large combustion plant directive (LCPD), which has been in place since 2001.

The directive specifies that plants built before 1987 must either comply with its emissions limits or, if they choose to opt out, operate for only 20,000 further hours and shut down entirely by 2015. The UK hosts the largest number of opted-out plants in Europe.

The nation is currently in talks with the EU about keeping RWE npower’s 1555 MW Aberthaw coal-fired plant open past a proposed 2016 shutdown date, although its emissions are now over the legal limit due to the LCPD. The plant had previously received exemptions due to its contribution to the local economy.

The UK has funded CCS development with a £125m ($204m) research programme, a £1bn commercialization competition and a Cost Reduction Task Force undertaken in co-operation with industry. In August the government published a policy document that said it is “outlining” ways for CCS to participate in its Contracts for Difference (CfD) scheme by 2016.