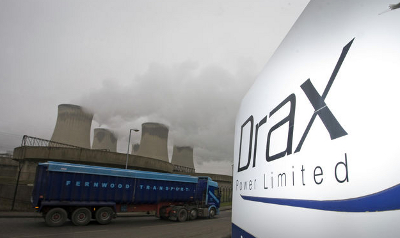 The facility, which will receive, store and distribute sustainable biomass to support the plant’s first converted biomass electricity generation unit, was launched on Monday.

It cost the Selby-based Drax $1.14bn (à‚£700m) to convert three of its six coal-fired power generating units to burn biomass.

The first has been running successfully on sustainable biomass since the beginning of April, with the second scheduled to come online next year and the third in 2016.

Each converted unit will provide enough renewable electricity to meet the needs of more than a million homes and Drax claims that biomass can deliver carbon savings of around 80 per cent relative to coal.

It added that all of the US-sourced biomass used is sustainable, protects biodiversity, prevents deforestation and delivers genuine carbon savings.

Drax chief executive Dorothy Thompson said: “The facilities being opened today are a unique feat of engineering and remarkably they have been delivered at an operational power station which the country depends on to deliver 7-8 per cent of the power we need.

It is the only renewable which can deliver low-carbon electricity on demand, at the scale the grid needs and precisely when it’s needed. It is also a low-cost renewable which will help to manage the expense of the UK‘s transition to a low-carbon economy.”

Mr Davey said: “Today is a real landmark for Drax and for Britain‘s energy security. Drax’s ambitious plans have made it one of Europe‘s biggest renewable generators, helping to increase our green energy supplies.

“In August we announced challenging and tough sustainability criteria for biomass, and we’ll be monitoring the sector against those standards.”

“Through converting old coal plants and building new biomass plants, we can have electricity when we need it and keep the lights on this decade using sustainable wood fuel instead of polluting coal power.

However she added that, “the Government actually plans to withdraw support for new biomass power-only plants ” which is a grave mistake. This makes it all the more vital that Government provides effective support for biomass conversion and combined heat and power under the new EMR package, to reassure investors that it understands the benefits of this cost-effective, baseload source of renewable energy.”

Drax has long been the UK’s biggest single emitter of carbon dioxide, but the firm said it is already the cleanest and most efficient coal-fired power plant in the country and the conversion will see its emissions reduced by around 10 million tonnes.

As part of the operation the firm has invested in 200 bespoke railway wagons which will start to deliver biomass to the power station from the ports of Tyne, Hull and Immingham, on England’s east coast.