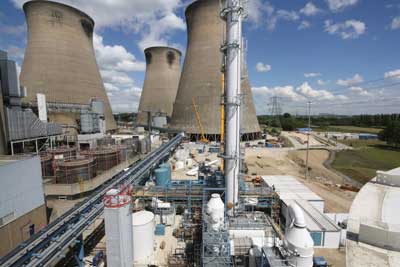 The move to sustainable energy and stronger environmental legislation is to account for the closure of yet another coal plant in the UK.

The 48-year-old Ferrybridge coal-fired power plant is to close, having accrued over £150m in losses.
SSE said it had taken the “difficult decision” to close the plant in West Yorkshire by March 2016.

The company said costs at the 48-year-old power station have been rising due to its age and it is forecast to lose £100 million over the next five years.

Paul Smith, SSE managing director of generation, said: “It’s been known for many years that the UK would have to phase out coal as it moves towards a more sustainable energy mix. We’ve sought to protect jobs and invest in the site to keep it running for as long as we possibly could but ultimately we’ve had to make this regrettable decision today.”

SSE said it will redeploy the 172 workers affected by the announcement to other sites where possible.

Phil Taylor, Professor of Electrical Power Systems and Director of the Institute for Sustainability at Newcastle University, said that the UK can’t continue to rely on fossil fuels and that change needs to be driven by carefully considered strategy, not just market forces.

“We simply can’t continue to burn coal – it’s one of the most environmentally damaging fossil fuels and is an inefficient and expensive way to meet our energy needs. It’s inevitable that coal-fired plants like Ferrybridge will close, with severe consequences for local jobs. The fact that this happens driven by market forces rather than as part of a well-considered energy strategy threatens the country’s energy security. This is why we need a long-term, progressive energy strategy in place urgently.”

He added: “Carbon capture and storage is still far behind where we need it to be, and we need to make sure workers affected by these shutdowns can get the transferrable skills and jobs they deserve. The solution to this is a long-term, well-considered national energy strategy and a system architect, maintaining security of supply.”

Michael Macdonald of trade union Prospect said that the closure was “a consequence of the lack of a coherent plan for decarbonisation”.

“The government’s reliance on significantly higher carbon taxes than the European Union has left Ferrybridge facing a bill of £64m more than, for example, comparable German power generators and forced the premature closure of a viable plant.

“Not only will this see the loss of 200 highly-skilled jobs at the station, and the equivalent in a local economy already reeling from plans to close Kellingley colliery, the loss of a further 1GW reduces the UK capacity margin to virtually zero.”

Macdonald added: “The lack of a clear roadmap for decarbonisation means the UK is missing out on the opportunity to reduce carbon emissions by 40 per cent through technology that has vast export potential.

“It also means large industrial consumers will have to shut down operations or switch to inefficient on-site diesel generation at times of peak demand.

“If we are to continue to include gas and coal in the generation mix until 2030, we need a coherent plan for transition to a low carbon future other than further government subsidises for generation methods that cannot guarantee baseload power and which push up the price for consumers.”

Shadow Home Secretary Yvette Cooper said that the closure was “dreadful news” and said she was “seeking urgent meetings with SSE, unions the plant’s workforce”.