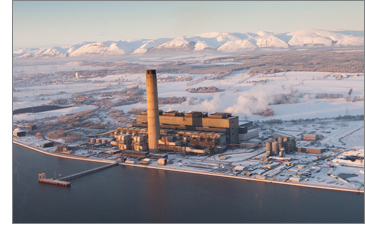 Coal-fired power generation has ceased in Scotland with the announcement that Longannet power station ended its service on Thursday. The news comes a day after the final power was generated at Ferrybridge in Yorkshire.

Scottish Power, the owner and a unit of Spanish utility Iberdrola, said the 2400 MW Longannet would burn through its remaining coal stocks by about 3pm on Thursday.
The latest closures have fed some concern about the UK’s tight margin between electricity supply and demand, as new plants are not being built in sufficient time to fill the gap.

Scottish Power said Longannet had been “essential to meeting the electricity needs of Scotland” through its final winter in operation, on average generating enough electricity to supply more than a quarter of Scottish homes.

Britain’s coal-fired plants have been closing ahead of a 2023 deadline for compliance with new EU rules on air quality.

Hugh Finlay, Scottish Power generation director, said Longannet’s closure was a sad day for the company and the end of an era for the country. “For the first time in more than a century no power produced in Scotland will come from burning coal,” Mr Finlay said.

Longannet was the largest power station in Europe when it came online in 1969 and has since burnt its way through more than 177m tonnes of coal.

Ferrybridge C coal-fired power station closed after 50 years of generation, according to SSE. The operators said a projected loss of £100m over the next five years made the continued life of the plant “unsustainable”.