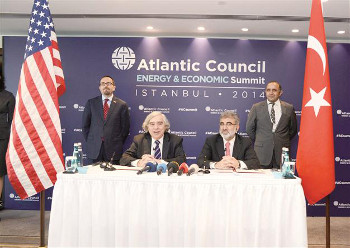 Turkey and the US have signed a memorandum of understanding which aims to increase their co-operation on wind power.

Turkish energy minister Taner Yıldız and US energy secretary Ernest Moniz signed the deal on Thursday at the Atlantic Council Energy & Economic Summit in Istanbul. In comments after the signing, Yıldız said the agreement aims to encourage wind turbine manufacturing in Turkey, with the goal of producing 3 GW of installed capacity and an investment target of at least $500m.

“Turkey had an installed [wind] capacity of 19 MW 12 years ago. Now, this is up to over 3500 MW. We aim to encourage the production of wind turbines in Turkey and more co-operation between American and Turkish companies,” Yıldız said.

Moniz commented: “The agreement is one step towards a stronger relationship between our countries in economic development, clean energy and addressing our mutual concerns on energy security.”

Turkey has faced energy security issues recently as its Russian gas deliveries have fallen by almost 40 per cent, Yıldız said, from 42m to 28m cubic metres per day.

The two ministers also discussed potential future collaboration on Turkish nuclear power, with Moniz saying that the US remains “committed to nuclear power” and aims to promote “small reactors between 50 and 200 MW for the future”. Yıldız called US nuclear, coal and renewable energy policies “praiseworthy” and said nuclear power is a crucial step in Turkey’s energy diversification strategy.