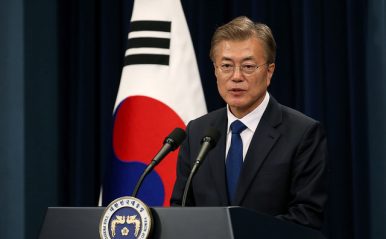 The South Korean government has decided to construct two new nuclear power plants, despite initially stating that is programme was complete.

Prior to his election, President Moon Jae-in had vowed not to allow any new reactors. Reuters reports that when he made that pledge, five nuclear power plants were under construction, three of them near completion. Mr. Moon said that he would scrap the other two, which were both in the early stages.
In June, Mr. Moon proposed an independent panel to study public opinion on the issue and make a recommendation. The panel worked with 471 citizens from various walks of life and conducted extensive surveys.

While the panel was at work, Mr. Moon suspended the construction of the two reactors, both inside the Gori nuclear power complex in Ulsan, in the southeast of South Korea.

On Friday, after three months of study, the panel endorsed a return to construction. Three-fifths of the panel supported the projects, while the remaining members were opposed.

The president has decided to take on board their decision and now complete the plants, despite a great deal of public opposition.

But the panel supported Mr. Moon’s long-term policy of weaning South Korea off nuclear energy, with 53 per cent urging that nuclear power be scaled back, while nearly 10 percent wanted it expanded. More than a third favoured maintaining current levels.

Besides the five plants under construction, South Korea had planned to build six more. Mr. Moon has scrapped those plans and his government has also vowed not to extend the operation of existing reactors when they reach their life expectancy.

Mr. Moon has also promised to invest more in renewable energy sources and said he would issue no new licenses for coal power plants.