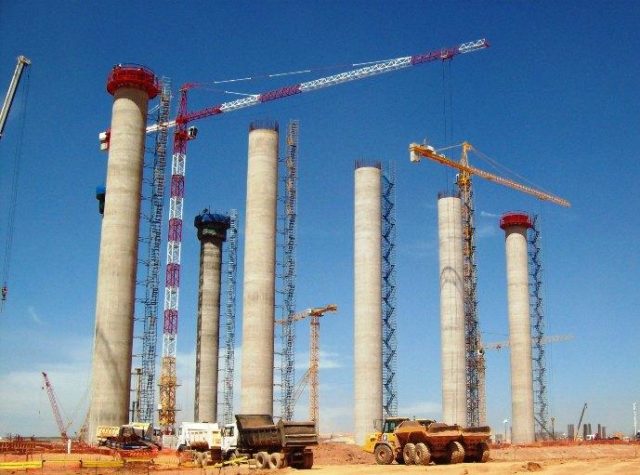 A strike by South African metalworkers has disrupted construction on two power plants.

The National Union of Metalworkers of South Africa (NUMSA) is striking to demand a 12 per cent wage increase, a ban on labour broking and a monthly housing allowance of R1000 ($94).

Activity has reportedly been disrupted at the construction sites for the coal-fired Medupi and Kusile power plants, with 1400 employees reported absent at Kusile (pictured) and 1000 at Medupi.

When completed, each plant will have a capacity of 4.8 GW, making them South Africa’s largest power generators. The first units at Medupi are scheduled to come online by end 2014.

Work has stopped on the boilers at Kusile due to no-shows by contractors working for Murray & Roberts, South Africa’s largest construction firm.

Utility Eskom, which is building the two plants, reported that construction is continuing at both sites.

NUMSA said it is planning to picket Eskom’s headquarters today to protest the company’s counter-offer of a 5.6 per cent wage increase. The union offered no projection as to when the strike might end.

“The strike is indefinite,” said NUMSA president Andrew Chirwa in a radio interview. “The only way to end the strike is to have a reasonable offer on the table.”

Eskom is South Africa’s main electricity supplier and is categorized as an ‘essential service’, making strikes against it illegal. The company is building the two plants to address power shortages that have been a drag on the nation’s economy.

According to finance minister Nhlanhla Nene, South Africa is likely to miss its 2.7 per cent economic growth target for this year due to the strike.