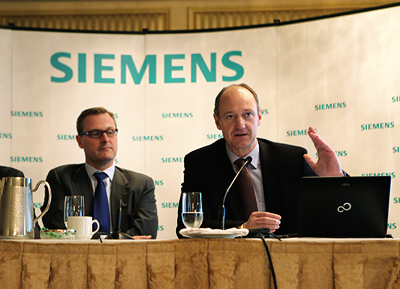 The chief executive of Siemens infrastructure group says that the world’s economies will continue to be powered by fossil fuels over at least the next two decades.

Speaking at Climate Week in New York, Roland Busch declared that renewables simply hadn’t advanced enough to replace coal and gas and the German multinational would continue to invest in fossils for “the really long term”.

The Guardian reports that despite strong investment in the sector Busch believes reliance on renewables alone does not stand up as a viable solution.

As an indication of Siemens’ approach to the situation, it is continuing to invest in carbon capture and storage technology, with pilot plants in the US and China, and in gas, which generates less carbon when burned than coal.

“You can run Germany on renewable energy on a sunny day when the wind is blowing, but you will still need coal on other days”, Busch said. “A lot of countries are still burning coal. Regardless of how much you push [renewable energy] in the next years you will still have a certain share of energy coming from fossil fuels. We are trying to make that more efficient, more low-carbon, with our technologies. You need coal, at least to some extent.”

“In the next ten to 20 years I can’t imagine running any economies without fossil fuel,” he added. “Beyond 20 years, it’s very hard to say.”

Geoff Morrell, the US spokesman for BP, also made it clear that fossil fuel businesses see a long-term future in carbon-intensive fuels despite efforts to tackle global warming.

“I must be frank with you: it has been very, very hard for us to make money in that [renewable energy] space. Our solar business we tried for 40 years to make solar work, and at the end of the day we just couldn’t make money at it. About a year or two ago, we got out of it. But we still do have a very big biofuels business, particularly in Brazil. We have a very big R&D programme in biofuels. We have 16 wind farms across the country.

So we are trying, but I must tell you it’s a challenging environment to make money in.”