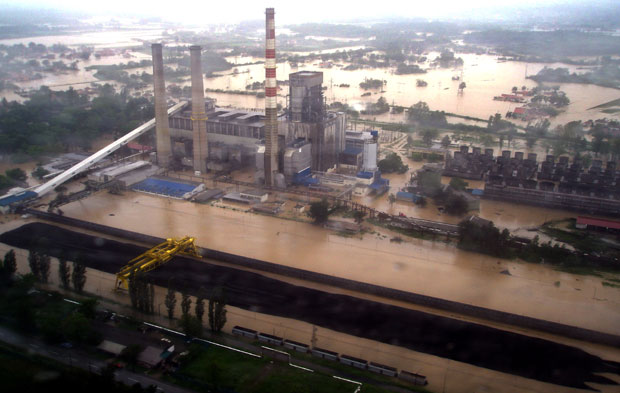 Serbia’s power generation capacity has been compromised by recent floods and the country’s government is coming to terms with the fact that it will now have to increase its energy imports just when it had planned to reduce that dependency.

Bloomberg reports that the RB Kolubara mine and much of the lignite used to power the nation is under 187m cubic metres of water and silt, and the Serbs are now resigned to electricity imports topping 10 per cent of their average annual consumption during the coming winter.
Lignite coal from the mine is normally responsible for half of Serbia‘s power output. With drainage and reactivation of its equipment, it is hoped that the facility will return to 70 per cent of its capacity by September.

JP Elektroprivreda Srbije, the state-owned power producer, wanted to end power imports by 2015 through upgrades and new capacity. Net energy imports, including gas and oil, account for around 40 per cent of Serbia’s annual trade gap, and the floods that inflicted $2bn in damage brought a setback after earlier delays in building power plants.

The nation’s coal output will probably contract by 45 per cent over eight to 12 months, and total damage to the power industry is seen at $663m, including lost revenue, according to a report by the European Union, World Bank and the United Nations, released at a July 16 donor conference in Brussels for flood-stricken Serbia and Bosnia-Herzegovina.

Serbia consumes 1.4 kg of Kolubara lignite to generate 1 kWh of electricity, data shows. This indicates a shortage of 21m kWh of electricity per day until production is restored, or imports worth €1 million per day based on the price for winter contracts at the main power exchange in the region.