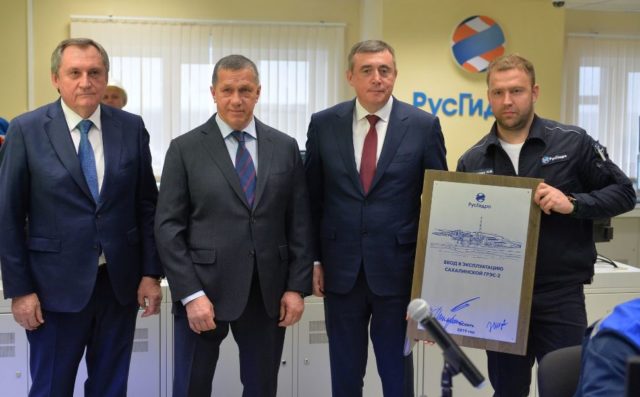 RusHydro has announced the opening of the Sakhalinskaya GRES-2 on Sakhalin Island. The modern 120 MW power plant with long-run annual output of 840 kWh will replace the obsolete Sakhalinskaya GRES, currently scheduled for decommissioning.

The new plant has successfully passed all comprehensive pre-launch testing and is ready for the Autumn-Winter season. The equipment for the plant was manufactured in Russia; the steam turbines by Urals Turbine Works, generators by ELSIB and boiler units by Power Machines.

The plant’s main equipment includes two turbine units and two boiler units. The plant also includes a unique 65-meter “dry” cooling tower. Unlike regular cooling towers, where a substantial part of water evaporates into atmosphere, this cooling tower is designed to exclude loss of water. All facilities and equipment of the plant are designed to withstand harsh natural conditions of Sakhalin Island, such as risk of earthquakes with magnitude up to 9, as well as powerful typhoons.

Commissioning of Sakhalinskaya GRES-2 is an important event both for RusHydro and the Sakhalin region. The new plant will guarantee reliable energy supply for Sakhalin and create reserve capacity.

The new plant will become a large-scale consumer of locally mined coal and lignite and, consequently, provide load to coal miners in the region.

The old Sakhalinskaya GRES will be dismantled following the 2019-2020 Autumn-Winter season upon which the employees transfer to other facilities of RusHydro.