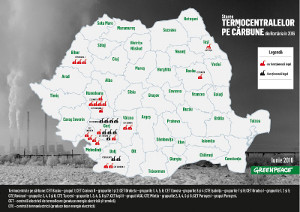 Romania’s coal-fired power plant fleet is in violation of European emissions laws, according to a report released this week by Greenpeace Romania.

The report found that, of Romania‘s 11 coal-fired power plants, only two have avoided exceeding EU emissions standards while the rest have continued to operate illegally.

Greenpeace said 2015 marked the end of a decade of investment in emissions reduction technology for the nation’s coal-fired power plant operators, during which some installed the necessary equipment, some closed their plants, and others continued to operate. “A good portion” of today’s operational plants have failed to comply with European emissions standards, the report said.

Report author Catalina Radulescu was quoted as saying that “in recent years, the thermal power plants in Romania had carbon emissions that have exceeded the EU standards over 10 times”.à‚

Radulescu cited five plants that have failed to reduce emissions to EU-mandated levels, as well as “other examples of thermal power plants that were suspended by the Environment Guard but continue to run, taking advantage of the absence of a system of penalties that would discourage a high level of emissions from power plants”.

The two coal-fired power plants that operate within legal limits are the 630 MW Isalnita plant and the 1320 MW Rovinari plant, according to the report.

Ionut Apostol, director of campaigns at Greenpeace Romania, said: “In these circumstances, Romania’s commitments in the context of COP21, our country’s contribution to limit global warming below 1.5 degrees C and the transition to a zero-carbon economy appear to be very distant targets.”