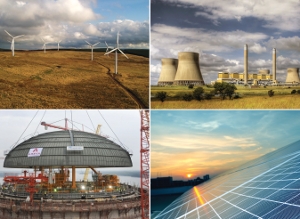 A report by energy analysts EnAppSys shows a dramatic turnaround in the fortunes of gas and coal power in the UK in the last quarter.

The agency’s data shows that gas-fired power stations generated more than twice the electricity output of coal-fired power stations during the first three months of 2016.
According to their latest quarterly market report gas fired plants increased their power contribution by nearly a third from the end of 2015. With gas prices falling and coal fired stations closing, generation from coal during the three month period was also lower than both nuclear and renewable sources.

This position is a marked turnaround from one year ago, when there was almost 50 per cent more generation from coal than from gas. In Q1 2015, coal generated 13.3 GW, against an output of 9.1GW from CCGT plants.

The turnaround reflects the poor economic conditions for coal generation, as demonstrated by the closures of Eggborough and Ferrybridge due to a combination of the UK’s carbon price support mechanism, falling gas prices delivering tight margins and the investment needs of increased environmental requirements.

Paul Verrill, a director of EnAppSys, explained: “The government has sent out the message that unabated coal will play no role in the market beyond 2025. With this message as a backdrop and with coal stations in the UK paying much higher carbon costs than stations on the continent, many coal stations have taken the decision to close earlier than anticipated.

“The government has previously declared an intention to get new CCGT plants in place to offset the coal station closures, but obviously this is not going to be possible ahead of winter 2016/17. As a result, the ancillary service contracts recently awarded to Drax and Fiddler’s Ferry will play a role in securing additional capacity for the next 12 months and this should reduce the risks of shortage.”

Overall, following a mild weather end to 2015, levels of power demand climbed by 18 per cent during the first quarter of 2016. Despite this increase, with power availability levels also growing, the supply margin was generally very comfortable, although when levels of wind generation did drop away the system saw high prices for stations able to provide additional power.

Paul Verrill said: “the decline in coal’s share of generation is seeing the market relying more and more on intermittent sources of power, increasing the role of ancillary services and storage. At times this has seen National Grid pay millions of pound on tight days to ensure that there is sufficient short term margin within the system. This has surprisingly come from the coal plants which had planned to close.

“One of the biggest issues facing the market into 2016/17 is the cost incurred to maintain margin until the capacity mechanism comes into full force in Oct 2018, and how National Grid and the government achieve this without distortion to market operation that can risk jeopardising  investment in new build.”