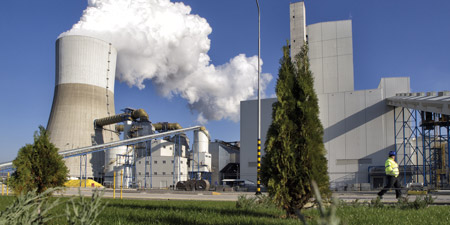 With plentiful deposits of lignite available throughout central Europe, it is no surprise that this form of coal is used by the thermal-powered generation sector, despite the high investment required to address the additional emissions challenges that it can sometimes present.

The plant is located at Galabovo, approximately 250 km southeast of Sofia. It consists of two 335 MW boilers that were commissioned in 2006 and first fired in 2010. Maritza is a T‐fired boiler consisting of six coal burners and full load is achieved firing five burners. The station burns lignite coal locally sourced from Maritza East Mines.

Combustion engineers will know that as lignite only contains around 30 per cent useable hydrocarbon, compared to around 80 per cent for a typical hard coal, generating one MW of electricity requires nearly three times the volume of fuel.

Additionally, as lignite consists of circa 20 per cent ash by volume, compared to 8-10 per cent for a typical hard coal, a lignite-fired plant has to deal with much greater output volumes of ash compared to hard coal-fired power plants. The combination of a high ash and low calorific value (the measure of usable energy) fuel creates real challenges associated with firing lignite while complying with stringent emissions standards, and while maximizing plant efficiency.

The plant at Maritza was therefore purposely designed to handle high volumes of air and fuel in order to fire lignite successfully. Further, and to maximize efficiency, its innovative features include an enlarged boiler hopper grate at the bottom of the furnace, which enables the combustion of any unburnt carbon which falls there and the transportation of large quantities of ash onto a wet ash conveyor, eventually transporting the ash away from the boiler.

However, once the plant was commissioned, it became evident that poor combustion in the furnace was quickly leading to an overwhelming buildup of ash together with a higher-than-expected quantity of unburnt carbon and fuel onto the grate, to such an extent that the grate mechanism, designed to facilitate the egress of ash, became seized.

This worrying issue led to unplanned unit outages occurring as frequently as every three days so that the solidified material that had formed on the furnace floor could be removed by hand. In addition, when the plant was running, it was doing so outside of IED-compliant NOx emissions levels. Clearly, something was not right with the plant firing system and operating procedures, and the combination of serious slagging plus non-compliance on NOx meant that continuous baseload operation was an impossibility, putting the ROI of the plant under pressure.

With urgent action required, the plant managers called in RJM International, a UK-based provider of emissions reduction products and systems and a company that has an industry-wide reputation for its ability to solve complex emissions challenges quickly. In fact, RJM had previously completed performance improvements and NOx abatement projects for two other AES thermal plants, at Kilroot in Northern Ireland (coal/oil) and at Tisza in Hungary (oil/gas), so was a natural choice for Maritza.

For RJM, its three-phase strategy at Maritza was no different from the one it followed at AES’ other plants: to establish what exactly was happening during the combustion process; to establish why it was happening; and, crucially, to determine what was needed to be modified and/or replaced to ensure that the plant would be able to operate as cost-effectively, reliably and efficiently as possible, yet still meet all current IED ELVs.

The first stage was to conduct a full site survey and carry out some further on-site testing using additional instrumentation in certain key areas.

Firstly, following a series of flow tests on the dampers and the nozzles that control airflow into the boilers, it was observed that the ratio between the velocity of the secondary air (SA) and the velocity of the pulverised fuel (PF) was, under certain conditions, running outside the recommended design recommendations. This meant that the larger particles of PF were penetrating further into the furnace than intended, failing to combust fully and then dropping down to the grate, forming a secondary – and uncontrolled – fire, thus resulting in the post-combustion within the slag buildup on the grate.

Secondly, whilst the firing stoichiometry within the burner region had been set at 60 per cent (i.e., an air lean burn environment suitable for keeping NOx low), it was clear that with only that amount of air entering the burners, efficient and sustainable combustion was not taking place, again meaning that partially-burned and unburned material was falling to the furnace floor. This secondary fire was also responsible for the creation of additional, uncontrolled NOx.

Thirdly, a thorough visual inspection within the furnace showed that slag was also forming on the side walls in a counter-rotational direction to the intended direction of the fireball. This was recorded as information to see if the CFD modelling program would predict the same effect.

During the site survey, some tests were carried out to increase the SA velocity by several orders of magnitude greater than the PF velocity. This had the effect of improving overall combustion and led to reduced volumes falling to the grate, but delivered elevated levels of NOx.

To deliver the required outcome in terms of compliance and reliable operation with no slagging, RJM concluded that the delivery and distribution of air and fuel to the furnace needed to be accurately measured and assessed, and therefore proposed that a CFD model be developed. This would simulate the performance of the firing system so that intelligent changes to settings and – if necessary – hardware could be determined to enable the boilers to fire reliably and within the prescribed emission limits.

The first challenge was to establish what was taking place within the furnace. When analysing both temperature and CO, the CFD model confirmed that, with one of the six mills out of service (a standard operating procedure to allow for routine maintenance), the fireball was not centralized in the furnace.

In addition, CFD ‘slices’ taken horizontally through the furnace model confirmed that circulation of the coal particles was either poor or nonexistent, with the result that the majority of the fuel was ending up unburnt on the grate. The model circulation patterns also matched the slag directions observed during the site survey, which added to the confidence that the modelling was capturing the furnace flow patterns.

With the objectives therefore to improve ignition and fireball stability, reduce NOx to below 200mg/Nm3 and minimize ash and carbon to the grate, the CFD results suggested that geometry modifications to improve furnace circulation would be beneficial. These included making changes to the secondary air flow and to the lower wall air ports to break up the corner vortices and deliver more updraft, thereby creating the conditions that would prevent fuel transport to the grate and support a more stable vortex for the fireball in the centre of the furnace.

Having improved the stability of combustion and reliable grate operation, the next challenge was to achieve optimum performance of the overfire air (OFA), to fully optimize the NOx performance. Our calculations completed during the site survey were being verified by the CFD model which confirmed that OFA was being sucked into the recycle ducts and effectively acting as “unmetered” primary air, thus increasing NOx.

The model also suggested that by altering the angle of the OFA ports, the rotational movement of the flame ball could be evenly maintained in the centre of the furnace at every level, i.e., throughout the height of the furnace. RJM then tackled the forced draft (FD) fans.

These were operating at or near their rated maximum and were occasionally stalling due to being overloaded. Since the proposed modifications would require them to operate at a higher pressure, to achieve a greater SA velocity at the ports, a CFD survey of the secondary air ducts was undertaken to see where pressure savings could be made. It highlighted that through the strategic use of additional baffles and vanes, useful pressure savings could be achieved on each of the three FD fan branches.

Next it was the turn of analyzing how the fuel reached the burners, and to do this RJM built a fifth-scale model of the PF ductwork. Its main objective was to improve the distribution of the PF across the recycle duct and so improve drying, grinding and mill loading. Secondly, the scale model was used to develop baffles which were then installed in the PF ducts after the mills, thus improving distribution at the PF nozzle. Ensuring even coal distribution and optimized coal grind into the burners also helps to improve combustion when firing at low stoichiometry to reduce NOx.

This project was unusual in that RJM was dealing with a brand new power station, but the firm’s tried-and-tested approach worked just as effectively.

Carrying out the full furnace CFD model combined with baseline test data enabled RJM to fully understand the combustion dynamics of the boilers and highlighted the poor circulation of the PF which was not being captured within the fireball.

Designing new nozzle inserts for the SA, WA and OFA ports meant RJM was able to optimize the injection angle and promote fuel/air circulation. This, in turn, allowed the boiler to operate at very low burner stoichiometry with stable and good combustion, resulting in minimal buildup of material on the grate and NOx emissions within IED compliance: below 200mg/Nm3.

Finally, to further reduce NOx and carbon in ash values, we carried out a physical modelling study of the mill and burner system that showed how baffles could be strategically placed in the PF ductwork to improve and control PF distribution.

Peter Lithgow, former chief executive and AES country manager during the time of the execution of the project, confirmed: “This was a very critical and challenging project technically and in terms of schedule. The results enabled the plant to generate reliably while meeting the latest emissions targets.”