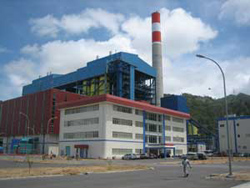 William Pomponi, a former vice president of Alstom US, has pleaded guilty to a role in a scheme to bribe government officials in Indonesia.

According to a statement by the US Department of Justice, the former vice president of sales for the French company’s Connecticut-based power subsidiary pled guilty to conspiring to violate the Foreign Corrupt Practices Act.

The seven-year scheme entailed bribing Indonesian officals in order to win the $118m Tarahan coal-fired power plant project in southern Sumatra.
The project, completed in 2007, was completed in conjunction with Marubeni Corporation, who has already paid an $88m fine for their role in the scandal.

Two other Alstom (Euronext:à‚ ALO) executives, including a former vice president of global boiler sales and a vice president of regional sales at the US unit, have already pled guilty in connection with the scheme.

Prosecutors accused the former Alstom executives of bribing an Indonesian lawmaker and members of the state-owned electricity company to get their help in securing the contract.

They concealed the bribes through payments to two purported consultants, prosecutors said.

Alstom potentially faces hundreds of millions of dollars in fines for violating a US law that bars bribes to officials of foreign governments.