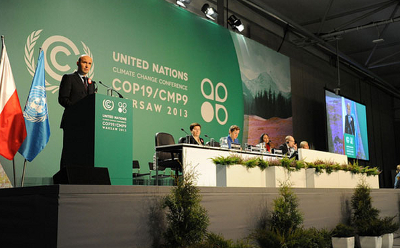 Poland, which is hosting this week’s United Nations conference on climate change hasn’t yet delivered its proposal for the outcome of the talks, but it is expected to continue to advocate the prioritisation of coal power in its generation mix.

Marcin Korolec, the Polish environment minister, said the most important issues are finance, a new mechanism to help developing nations cope with climate-related losses and a timetable for discussions that will result in a draft treaty for 2015 appearing for negotiators to consider at next year’s meeting.
Poland has given no indication that it will reduce its coal-fired power capacity in favour of greater investment in renewables and in the coming weeks is likely to decide to double the size of one of its biggest coal-burning power plants, at Opole, which is proposed for a $3.8bn expansion.

Many commentators believe Poland’s involvement in the UN global warming summit may weaken the final agreement due to its commitment to coal.

“The Polish government support for coal will not help to convince poor countries that it is committed” to advance the fight against global warming, said Wendel Trio, EU director at Climate Action Network, a pressure group attending the meeting.

However Warsaw is adamant that any transition to renewable power should be done incrementally and at a slower pace, with Poland’s Deputy Environment Minister Beata Jaczewska saying in an interview, “You can’t shift from fossil fuels to renewables overnight. We need to replace old plants and we do that with climate in mind: new power units will emit much less carbon dioxide.”

“We treat Poland’s coal reserves as an asset and a force for stability in energy supplies,” Deputy Prime Minister Janusz Piechocinski said in a speech to parliament in Warsaw on Thursday. “Our energy security now and for many years to come will be based on coal. The reindustrialization of Europe should be just as important a goal as emission reduction.”

However advocates of renewable power are many in the country with about 70 per cent of Poles surveyed in a Greenpeace poll supporting the use of renewable as the nation’s primary energy source, That compares with 18 per cent who back coal, according to the survey by the Public Opinion Research Centre.