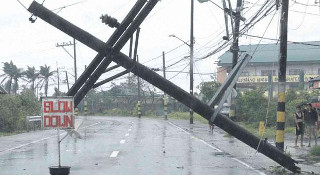 The Philippines’ grid operator said on Sunday night that it is working to reconnect power plants cut off from the grid by Typhoon Glenda.

The National Grid Corp of the Philippines (NGCP) has now reconnected 380 MW of the 760 MW Pagbilao coal-fired power plant in Quezon, and 250 MW of the 1 GW Santa Rita gas-fired plant in Batangas. Both plants were set to resume supplying power to Luzon, the nation’s largest island, on Sunday night, NGCP said.

According to energy secretary Carlos Petilla, the San Lorenzo gas-fired plant in Batangas was set to resume partial operation (250 MW of its 500 MW capacity) as well. But 300 MW of the 600 MW Calaca coal-fired plant and 300 MW of the 630 MW Masinloc plant, also coal-fired, remain offline, Petilla said.

A further six power plants were partially reconnected late last week and over the weekend after Glenda blew out to sea on Wednesday.

Most of the sidelined plants are in the Southern Luzon region, southeast of Manila. NGCP expected Luzon’s grid to have reserves of just 189 MW for today (compared with 900 MW yesterday), with Petilla saying mid-afternoon would be critical.