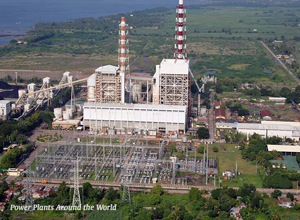 The Philippines is facing a projected power shortfall of 800 MW next summer due to delays on two major power plant projects.

Most recently, DMCI Holdings, the parent company of utility Southwest Luzon Power Generation Corp, has reported that a planned expansion of its 600 MW Calaca coal-fired power plant (pictured), located in Batangas, has been delayed.

The project’s first phase will see two 150 MW units built, with another 350 MW unit to follow within three years, bringing the plant’s total capacity to 1250 MW. As it now stands, the first 150 MW unit’s commissioning has been postponed from the set date of June 2015, after a previous postponement from March to June.

Energy secretary Carlos Jericho Petilla was quoted as saying: “DMCI’s plant will be delayed. There was no specific reason but we asked them to explain. My suspicion is that their EPC contractor will not be able to deliver on time”. China National Electric Engineering Co Ltd is the turnkey contractor for the expansion’s first phase.

However, DMCI’s president Nelson Dadivas said that the firm is still targeting a commissioning date of “April to May”. The plant is currently delivering 550 MW to the grid.

“DMCI is fully aware of the looming power crisis in the country and has continuously endeavoured to complete the power plant projects on time to avert or mitigate such crisis with the support of the Department of Energy,” the company said in a prior statement.

Another power project by Australian LNG project development firm Energy World Corporation, the Pagbilao combined-cycle gas-fired plant which was due to come online in December of this year, has also been delayed. The firm’s CEO, Stewart Elliott, told newspaper The Philippine Star that it is now targeting early 2015 for commissioning.

In order to deal with the predicted power shortfall, Petilla has said the Department of Energy is “formalizing a directive that no [existing] power plants are to have scheduled maintenance shutdowns during summer of 2015”.