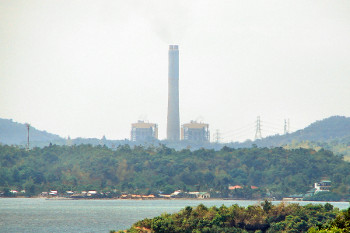 A leak at a Philippine power plant has spilled 4000 litres of heavy fuel oil into the sea, local news reports state.

A ruptured pipeline at the 1218 MW coal-fired Sual plant (pictured) in Pangasinan province caused the leak at 2:23 am on Monday morning, plant operator TeaM Energy said. According to the plant’s head of external affairs Froilan Romualdez, the incident occurred as the oil was used during startup of Unit 1.

The Philippine Coast Guard said in a statement that the oil “was released to the cooling system outfall, which was controlled and contained by the said power plant.” It then “rapidly spread and reached the shoreline,” potentially affecting the town of Sual’s fishing industry. The oil spill is reported to be near 700 fish cages, although TeaM Energy said the oil was contained soon after the leak and most remained within the plant’s premises.

However, the Coast Guard said it is considering filing environmental damage charges against TeaM Energy, which is jointly owned by Japan’s Tokyo Electric Power Company (Tepco) and Marubeni Corp.

The Sual plant is the largest coal-fired plant in the nation and has been operational since 1999.