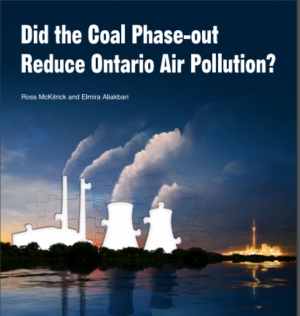 In a report titled Did the Coal Phase-out Reduce Ontario Air Pollution?, released this week, research organization the Fraser Institute found that power generation was a “minor contributor” to particulate matter and ozone pollution in 2005, when Ontario’s coal phase-out began.

According to the report, while the province’s total fine particulate emissions were above 250,000 tonnes per year, power generation was responsible for less than 10,000 tonnes, or 1-2 per cent of total emissions. At least half of these emissions were from other sources such as road dust, agriculture and construction, it said.

After the “extremely costly” phasing-out of the province’s five coal-fired power plants, which was completed in 2014, the report found a reduction in fine particulate matter of between 6-12 per cent from peak levels depending on region, an effect that was “not statistically significant”. The report found “no evidence” that the coal phase-out reduced NOx levels, but it did find a statistically significant reduction in peak O3 levels, although it noted that this was offset by a “significant increase” in emissions from new gas-fired power plants.

The report concluded that the coal phase-out had “yielded small improvements in air quality in some locations … which were comparable in size to projected air quality improvements that could have been achieved through installation of new pollution control systems rather than closing the plants”.

These retrofits were already underway at the time the phase-out began, the report noted, adding that if installed, scrubbers on the stacks of the two largest coal-fired plants would have eliminated 95 per cent of their particulate emissions, and that low-NOx burners would have reduced NOx emissions by 75 per cent.