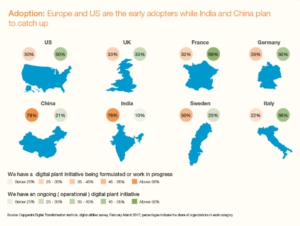 One in five power plants will become ‘digital plants’ by 2025, a new report predicts.

According to the report from consultancy Capgemini’s Digital Transformation Institute, which examined digital investments by power plant owners in China, France, Germany, India, Italy, Sweden, the UK and the US, digitalization is predicted to lower plants’ operating costs by 27 per cent on average and to reduce the global power sector’s carbon emissions by 4.7 per cent.

However, the report noted that only 8 per cent of utilities are currently digitally mature, and just 19 per cent of power plants are expected to go digital within five years.à‚

“The Digital Utility Plant: Unlocking value from the digitization of production” surveyed 200 executives at the director level or higher in global utility firms. It found that utility companies are investing in significant digital enhancements to coal– and gas-fired power generation with the aim of increasing production efficiency and reducing generation costs.

Over the past five years, firms have invested an average of $330m in digitizing their power plants, with individual plants saving $21m per year on average.

“As the price of renewable energy continues to reduce, these savings will enable organizations with gas and coal-fired plants to remain competitive,” the report said.

In terms of emissions, digitized plants are expected to reduce their CO2e output by 625 million metric tonnes by 2025. à‚ à‚

But to unlock the predicted benefits of digitalization, the report highlights the need to acquire “digital maturity” in order to plan and manage digital power plant projects. A ‘digital beginner’ organization typically achieves 33 per cent less in productivity gains from digitizing than a ‘digitally mature’ organization, Capgemini said.

“However, the industry can go further. With many utilities yet to digitize power plants, it is possible to reduce carbon emissions even more, if these utilities invest in digital skills and technologies.

“Firms which choose to embrace the digital future of power production now will gain a greater competitive advantage, lower production costs and boost their brand reputation.”

The full report is availableà‚ here.