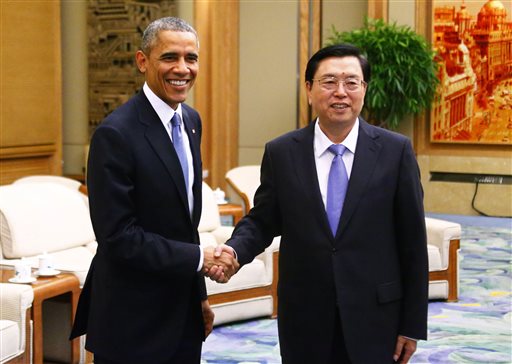 The practicalities behind the China-US agreement on emissions last week are coming into focus.

According to the IEA’s World Energy Outlook, China will spend $4.6trn upgrading its power industry by 2040. Nuclear and renewables alone will garner $1.77trn in new investment, taking 79 per cent of all the funding for power plants built in China, with fossil fuels getting the remaining share.

Chinese President Xi Jinping committed with President Obama to cap carbon emissions by 2030 and turn to renewable sources for 20 per cent of the country’s energy.

Bloomberg reports that his pledge would require China to produce either 67 times more nuclear energy than the country is forecast to have at the end of 2014, 30 times more solar or nine times more wind power – – almost as much non-fossil fuel energy the entire U.S. has in generating capacity.

In essence that would mean building roughly 1,000 nuclear reactors, 500,000 wind turbines or 50,000 solar farms. The cost will run to almost $2trn, holding out the potential of vast riches for nuclear, solar and wind companies that manage to win contracts in what will amount to an energy revolution for the country.

“China is in the midst of a period of transition, and that calls for a revolution in energy production and consumption, which will to a large extent depend on new energy,” Liang Zhipeng, deputy director of the new energy and renewable energy department under the National Energy Administration, said at a conference in Wuxi outside of Shanghai earlier this month. “Our environment is facing pressure and we must develop clean energy.”

By 2013, China had already become the world’s largest producer of wind and solar power, but the country’s grid infrastructure faces big challenges to ensure the extent of renewables forecast is met.

About 11 per cent of wind capacity sat unused last year because of grid constraints, with the rate rising to more than 20 per cent in the northern provinces of Jilin and Gansu, according to the China Renewable Energy Engineering Institute.

Electricity demand will rise 46 per cent by 2020 and double by 2030, according to the International Energy Agency. China currently depends on coal for two-thirds of its energy, more than any other Group of 20 country except South Africa.