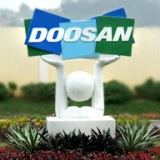 Doosan Heavy Industries & Construction has received an order to build a coal-fired power plant in Vietnam, a project estimated at $1.5bn.

The project is scheduled for completion by June 2018.