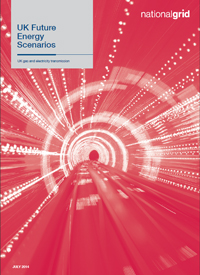 The UK National Grid’s Future Energy Scenarios report has little to enthuse about for coal-fired power, but is much more positive about the potential of shale gas for the nation’s power future.

The report maps out four potential futures for the UK energy sector, each reflecting sustainability, affordability and security in the supply of energy. All four scenarios suggest that the majority of coal power stations will close by 2023 as they choose not to comply with emissions requirements, with a move towards renewable sources in each scenario.
Meanwhile, a failure to invest in UK gas production could see dependency on imports rise to 90 per cent by 2035, according to National Grid, which also proposed that shale gas could provide over a third of the country’s gas supplies in 2035, if the conditions for investment are created.

The forecast from the power network comes amid growing fears about the UK’s energy security, with the spare margin between demand and supply set to narrow to a mere two per cent towards the middle of the decade, raising the risk of blackouts.

There is consensus that most coal-fired plants will have no option but to close by 2023, with only three being left in use, due to the impact of the EU Industrial Emissions Directive.

Richard Smith, National Grid’s head of energy strategy and policy, told reporters in London yesterday that gas-fired generation will step into the breach.

“The closure of the coal power stations means that additional generation is required to maintain the security of supply standard, resulting in new gas-fired generation commissioning, particularly from 2018-19 to 2021-22,” National Grid states in the report.

The shutdowns call into question whether new gas plants can come online quickly enough to replace coal generation during the second half of this decade. The UK has shut 8.2 GW of coal generation since December 2012 because of European Union rules intended to curb carbon emissions, leaving a further 13 GW at risk of closing by 2023 under different regulations.

Coal-fed generation supplied 37 per cent of UK electricity in this year’s first three months, compared with 23 per cent for gas, according to the Department of Energy and Climate Change. The nation generated 19 per cent of its power from wind, hydro and bioenergy in the period, the data show.

Failure to invest in gas could see dependency on energy imports rise to 91 per cent in order to ensure energy security.

To read the report in full