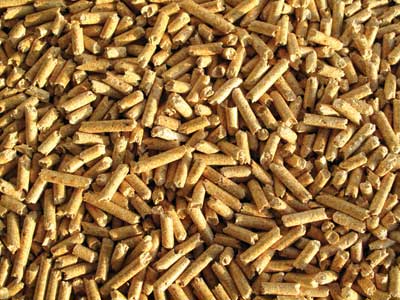 With specific modifications, a bituminous coal-firing system can be converted to operate with wood or other biomass pellets, write Thomas Krause and Yaqoub Al-Khasawneh

Studstrupvaerket power station consists of two units, 3 and 4, which are designed for combined heat and power (CHP) production. The plant’s maximum net power output is 350 MW and the maximum district heating output is 455 MJ/s per unit.

Dong Energy Thermal Power is planning a fuel conversion at its Studstrup power station, unit 3 (SSV3) to firing 100 per cent wood pellets, while as far as possible keeping the maximum thermal heat output at 930 MWth with the option of using the present fuel qualities (coal, straw and oil) alternatively to the biomass.

In summer 2013, one of SSV3’s upper mills (mill No. 40) and the respective burners were upgraded to allow wood pellet operation as well as coal combustion when necessary.

After the implementation of the modifications, the transition from coal to biomass operation (and the reverse) should be possible within a period of 30 minutes or less for each mill while the unit runs continuously.

Four different trial runs were conducted from October 2013 to February 2014 using bituminous coal and different kinds of wood pellets for testing under different load conditions, variable load ramps and fuel switching between coal and biomass at the modified mill No. 40.

From December 2013 to March 2014, a total of about 70,000 tonnes of wood pellets were ground and burned with the upgraded combustion equipment.

The boiler at SSV3 is equipped with four bowl and roller mills of type MPS 190. Inside the mill (see Figure 1) the grinding process of the fed raw coal is initialized by rolling off stationary, rotating grinding rollers upon a turning grinding bowl.

The fuel is fed via a coal chute centrally into the mill to the rotating grinding bowl, and afterwards transported by centrifugal force to the grinding rollers. These are pressed on the grinding bowl due to their own weight and an additional external power, generated by a spring-loaded rope pull system.

Because of the differences concerning grinding, drying and pneumatic transport and the fineness requirements for combustion of pulverized coal and wood pellets, it is not possible to grind both fuels simultaneously. The parameters of the grinding system regarding the requirements of pulverized fuel drying and fire and explosion protection can be set for either coal or wood pellets. After correct setting, the mill operates economically and reliably with the chosen material.

These mechanical modifications allow mill operation with both fuels. The classifier, for example, can be controlled by the angle adjustment of the louver blades and by adjusting the classifier rotational speed to fulfil the different fineness requirements for bituminous coal as well as biomass combustion.

The grinding system is equipped with additional temperature measuring points and an explosion suppression system for fire and explosion protection.

Besides mechanical modifications, some adaptations in the control system had to be arranged. Mill operation with bituminous coal or wood pellets is realized individually by an independent operation programme which contains the required parameters and limit values for mill operation.

The 24 burners were originally designed for the use of pulverized bituminous coal. Six burners are arranged in four elevations located on the boiler front and rear walls. Each burner is connected to the combustion air supply system by a secondary air duct, including the necessary damper and flow measuring devices for individual combustion air control. The modification’s target was to operate the swirl burners in either 100 per cent bituminous coal or 100 per cent biomass mode.

For coal/biomass combustion, the six burners of the upper level 40 were upgraded with the essential DS Burner elements.

Concentric setup and swirling of all burner flows are essential features of this burner type. The functional principle of the DS Burner is determined by the definition of the ignition, as well as its start and progress in a low-oxygen, primary reaction phase. The process-relevant preparation of the fuel particles is in the focus of the burner function as well as the pyrolysis and oxidation of the pyrolysis products.

In general, the DS Burner (see Figure 3) consists of the following main components:

The prerequisites for the process are created through the interaction between swirl devices and fuel nozzle, as well as the resulting heat transfer in the nearby burner zone. Early oxidation of the pyrolysis products with a defined oxygen volume is the precondition for stable low-NOx combustion in the core flame.

The core flame is surrounded by spatially staged flows of secondary and tertiary air, while the combustion process is supplied with the necessary oxygen by a continuous delayed supply from the peripheral burner flow.

On the circumference of the core air tube, primary swirl blades with angle position of 35° to the flow direction are welded at a certain distance from the burner tip. In addition, the existing core air nozzle was replaced by a new one made of heat-resistant material with a length of about 650 mm.

Due to the new design of the pulverized fuel tubes, new secondary air swirl inserts have to be installed. With the exception of the SA nozzle with TA deflector, all burner parts on the combustion air side remained unchanged.

Coal and wood pellets have clearly different grinding and combustion behaviours. Thus the operating parameters of the firing system have to be adjusted to the individual fuel properties to comply with the following tasks: grinding and classifying, drying, pneumatic transport and distribution of the fuel dust into the individual pulverized fuel lines. Furthermore, stable ignition at the burners and the combustion process in the furnace have to be ensured. Mill operation with coal or wood pellets is realized individually by an independent operation programme.

Due to the high volatile content, the reactivity of pulverized biomass is much higher compared to pulverized bituminous coal.

Special attention was paid to a sufficient distance between carrier gas temperature and self-ignition temperature of the pulverized biomass in a hot air atmosphere and the preventing of biomass ignition at hot surfaces in the grinding system.

During coal operation the required primary air temperature and, partly, the surface temperature of the grinding system could lead to ignition of the wood pellets. Before switching from biomass operation to coal operation it has to be ensured that the grinding system – in particular the hot air annular channel below the nozzle ring of the mill and the reject box – is emptied of biomass. The primary air temperature may only be increased to the typical values after this step.

Before switching from coal to biomass operation it must be ensured that the hot zones inside the mill are cooled down sufficiently to prevent self-ignition of the fuel at any operating mode or during a shutdown procedure. Therefore, additional temperature measuring points inside the mill housing were installed. While switching fuel types, dust samples were taken from the PF lines after certain times to determine the duration of the fuel discharge.

Figure 2 shows the parameters and temperatures of the primary air upstream mill and of the carrier gas at mill outlet, as well as fuel parameters to reach the boiler peak load of 930 MWth in four mills operating mode.

Later the mill was equipped with a dynamic classifier, type HEP 33H6, for fineness improvement. Today the average grinding fineness is about R_0.09 = 14 per cent. Related to the design fuel and the higher degree of fineness, the coal mass flow for the same mill load is 11.65 kg/s.

The pulverized coal mass flow, the accessible grinding fineness and the dynamic behaviour of the mill (requirements given by EnergiNet DK Grid Code: load changes at 50-90 per cent plant load not less than 4 per cent per minute; below and above this range plant load changes not less than 2 per cent per minute) should not be limited by the mill modifications. Furthermore, the functionality of the modified burner must be demonstrated. The burners should have a stable ignition and fully satisfying coal combustion behaviour.

The performance of the modified mill No. 40 and the function of the dedicated burners were proved in a trial run in February 2014. The mill was operated safely with a coal mass flow of 12.5 kg/s and measurements were taken at the mill as well as coal sampling at the pulverized fuel lines. The burner functionality was monitored by the flame scanners and checked by video recordings of wing burners No. 41 and 46 from the side wall inspection holes.

A deterioration of part load behaviour appears while the mill is in coal operation. The modifications have led to an increased grinding capacity, while also increasing the achievable minimum load. Striving for minimum load of 5.2 kg/s leads to a disturbed smoothness, so that the obtainable minimum load was increased to 6-6.5 kg/s. The desirable minimum load could be realized by adjustment of the grinding force during mill operation (state-of-the-art, but actually not implanted in SSV3) or by a moderate decrease in the grinding capacity of the modified mill.However, with this exception, the performance of the modified grinding system as well as the burners turned out to be comparable to the capacity of the unmodified units.

The target was a period of 30 minutes per mill (shut down the mill and restart it with the other fuel) or two hours for all four mills for switching from wood pellet operation mode to coal operation mode (and the reverse). Furthermore, it should be ascertained whether a direct switch between operating modes without stopping the mill is possible. A switch in a period of 30 minutes with shutdown/restart of the mill was possible from the beginning.

It is important to note that, during the switch from coal to biomass operation mode, the mill is cooled down sufficiently prior to the biomass feeder start in order to decrease the material temperature at the nozzle ring and the hot air inlet channel below the self-ignition temperature of biomass in particular. During the cooling-down process with the operational programme, temperatures inside the mill were measured.

When switching from biomass to coal it must be ensured that no biomass remains inside the mill, as self-ignition could occur due to the increased primary air temperature in coal operation mode. The complete cleanout of the mill is ensured by a special purge sequence. The mill reject box has to be cleaned out completely as well.

Good dynamic behaviour of the grinding systems opened the possibility of a direct switch between operation modes. Direct switching without any influence on flame stability at the burner was tested in a separate trial run. Comprehensive safety assessments were conducted, and the operation programmes were modified accordingly.