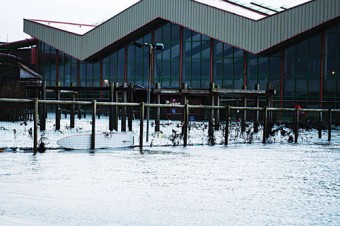 The owners of a top western Ireland leisure complex are assessing the damage done to the facility by last week’s Superstorm Christine, which may also have damaged a brand new combined heat and power plant at the site.

Leisureland Galway’s proximity to the Atlantic Ocean at Galway Bay saw it become one of the city’s main victims with the complex’s swimming pool and gym being completely flooded.

The facility was also plunged into darkness after the power to the electrical panels were damaged. Fire crews were called to tackle a blaze and more flooding issues in the underground section of the complex.

Management have so far unable to establish what damage had been caused to the combined heat and power plant, which was installed last year with the aid of a €400,000 government grant.

An estimate of the overall cost of repairs and the clean-up operation is not known at present.