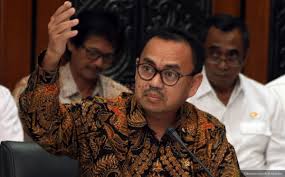 Indonesia’s government aims to establish a task force to address the nation’s ongoing power shortage, a senior official has said.

Sudirman Said, the energy and natural resources minister (pictured), told China’s Xinhua news service on Monday that the new team would be “tasked to accelerate power plant projects so as to avoid power crisis”.

Procedures involved in power plant construction are to be simplified, with “unnecessary” documents and other aspects of the project development process eliminated. In addition, the task force aims to foster local manufacturing.

Sudirman added: “This team would be fully supported by related ministries, among others home affairs, spatial layout and agrarian, financial, forestry, environment affairs and energy and mineral resources ministries.”

He said the task force is expected to produce a plan for addressing the nation’s power shortage within two weeks.

Meanwhile, the Jakarta Post reports that state-owned aluminium producer PT Indonesia Asahan Aluminum (Inalum) has refused a government attempt to commandeer 210 MW of its power for state-owned utility PT PLN. The move would help alleviate the power crisis in North Sumatra province, which experiences rotating blackouts of up to four hours per day.

The leader of the Inalum workers’ union, Muhammad Ridwan, said on Monday that such a move would interrupt production and that the government should solve the power crisis on its own. He said: “So far, Inalum has supplied 90 MW of power to the province. If we’re compelled to supply another 210 MW, production will be cut and Inalum will die.”

Indonesia plans to build 35 GW of power plant capacity by 2020, including a 5 GW coal-fired plant in central Java that is expected to begin construction next year and come online in 2018.