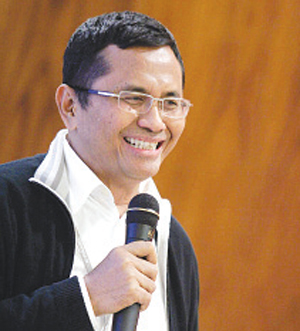 A 2000 MW coal-fired power plant is to be built in Jakarta, Indonesia as the country attempts to modernise its energy infrastructure following years of neglect.

Reuters reports that State-Owned Enterprises Minister Dahlan Iskan (pictured) made the announcement of the $1.8bn plant on Tuesday.

Indonesia plans to add up to 60 GW of electricity capacity to meet demand that is expected to roughly double by 2022, requiring a total of $125.2bn in investment, an energy ministry official said last month.

State-owned logistics and industrial parks developer PT Kawasan Berikat Nusantara (KBN) President Director Sattar Taba told reporters at a briefing, that he expects the project, which will be a public-private partnership, to take four years to complete and ground-breaking is slated for the first quarter of 2015.

Most of the funding for the project will come from a Chinese consortium, which will also be involved in building the plant, Taba said, declining to disclose specific names.

“The need for electricity in Java is very high whereas supply is very low, so it is predicted that in 2017 there will be an electricity crisis if the plant is not built from now,” Taba said.