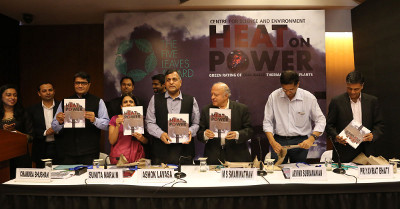 India’s coal-fired power plants are underperforming in a number of key areas, a study released on Saturday has found.

The report, Heat on Power, from the New Delhi-based Centre for Science and Environment (CSE) rated 47 coal-fired power plants around the country in terms of efficiency and compliance with environmental regulations, concluding that together they are among the world’s “most inefficient”, with “immense scope for improvement”.

“The objective of the study was to give a clear picture of the environmental performance of the [power generation] sector. Our finding is that in India, where the demand for power is increasing, power plants are performing way below the global benchmarks”, CSE Director General Sunita Narain (pictured, front row, second from left) said in a statement.

The power sector scored “poorly on all parameters”, the report said, receiving an overall score of 23 per cent – compared to the 80 per cent that a plant following all best practices could potentially achieve – and with 40 per cent of the rated plants scoring below 20 per cent.

The average efficiency of the plants in the study was 32.8 per cent, one of the lowest among major coal-based power-producing countries. The average CO2 emissions figure was 1.08 kg/kWh, which the report noted is 14 per cent higher than China’s.

The study found that the plants collectively use around 22bn cubic metres of water, or over half of India’s domestic water need. And it noted that 55 per cent of the units were in violation of emissions standards “which are already extremely lax”.

In addition, the plants were found to be operating at an average of 60-70 per cent capacity. If capacity utilization is improved, the report said, the sector will be able to meet additional power requirements without building new plants.

The plants found to be top performers, each scoring between 45 and 50 per cent, were West Bengal-based CESC-Budge Budge, followed by JSEWL-Toranagallu (Karnataka), Tata-Trombay (Maharashtra) and JSW-Ratnagiri (Maharashtra). The Tata-Mundra plant (Gujarat) received an award for highest energy efficiency, while Gujarat Industries Power Company Ltd’s (GIPCL) Surat plant won an award for lowest water use.

The performance of NTPC Ltd, India’s largest producer of coal power, was found to be “below par”. Although NTPC did not disclose its data and thus was rated based on a survey and publicly available information, six of its plants received scores of 16-28 per cent.