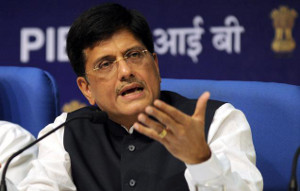 India’s power minister has said the nation aims to more than double renewables’ share in its energy mix by 2020 as the nation also announced a five-fold planned increase in solar power capacity.

Minister of Power, Coal and New and Renewable Energy Piyush Goyal (pictured) said renewables could supply 15 per cent of India’s energy within five years, up from the current 6 per cent.

However, Goyal acknowledged that coal will continue to dominate India’s energy landscape “for some time”, the Economic Times reported. Coal currently provides 60 per cent of India’s electricity.

Goyal also warned that renewable energy project developers should not count on subsidies being available in future, but should instead focus on getting banks to more readily finance their projects. On the banks’ part, he said, “a more realistic interest rate with staggered repayment could perhaps be the answer to solar energy expansion”.

In advance of this week’s United Nations climate conference in Peru, India announced plans to increase its installed solar power capacity to 100 GW by 2030.The recent US-China climate agreement is seen by many as putting the focus on India, the world’s third-largest carbon emitter.