Important pointers for coal and gas in Siemens study 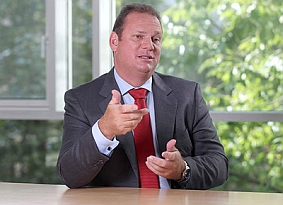 A report by Siemens predicts that by 2030, the worldwide power sector could cut CO2 emissions by an amount equivalent to EU’s total annual emissions.

That’s just one of the findings made in a published study by Siemens and Professor Horst Wildemann of the Technical University of Munich in Germany.

Global power demand is set to increase on average by nearly 3 per cent per year over the current and next decade. Cumulatively, this moderate growth will cause overall power demand to rise by more than half of its current level between now and 2030. If new power plants are added as foreseeable, associated CO2 emissions are likely to increase by a quarter or 3,500 megatons.

“If coal-fired power plants were replaced on a wide scale with gas-fuelled power plants by 2030, CO2 emissions in the power sector would even drop by five per cent compared to today’s levels,” says Professor Wildemann. “Of course, it would be illusionary to replace all coal-fired power plants with gas-fuelled units ” but the potentials identified are really impressive,” Wildemann continues. The global CO2 emissions that could be eliminated per year by ending power generation from coal are the equivalent of the entire CO2 emissions of all 28 countries of the European Union.

“In our study we examined the local situations and different needs in various regions of the world,” notes Michael Sàƒ¼àƒÅ¸, (pictured) member of the Management Board of Siemens AG and CEO of Siemens’ Energy Sector, when presenting the study at the World Energy Congress.

“Of course, besides sustainability and the need for dependable power supply, economy is always important ” there would be no point in closing down new coal-fired power plants ahead of schedule just to cut CO2 emissions. But it is equally apparent that all-out expansion of renewable energy sources alone does not automatically improve the climate balance, as rising CO2 emissions in Germany impressively highlight.

On the other hand, shutting down aging coal-fired power plants not only reduces emissions significantly, but can also make economic sense, as has been proven in the United States. In our study, we analysed various scenarios while keeping an eye on a three-way balance between sustainability, reliability and economy,” Sàƒ¼àƒÅ¸ explained.

The study shows that ” despite extreme differences in regional conditions ” all countries fit fairly comfortably into one of five archetypes in the energy context. In countries with only slowly rising power demand there are on the one hand the “green pioneers” who bank heavily on renewables, and on the other the “traditionalists” with only a low proportion of ecofriendly power. Among the countries with rapidly increasing demand for electrical power there are the “energy-hungry” nations that have already achieved a high level of electrification, and the “next-wave electrifiers” where there are still major gaps in power supply to all households. The fifth group identified is the “oil export maximizers” that are characterized by the challenge to enhance efficiency in the field of oil and gas exploration.

As regional highlights of these analyses, the study found for example that Europe could save some EUR 45 billion in its drive to expand power generation from renewable resources by 2030 if those sources were tapped at the best locations ” while achieving the same ratio of renewables in the power mix.

In the United States, the $80bn losses per year due to indirect costs of power failures could be saved if the quality of the grid were improved. And in China it would be possible – despite the doubling of power consumption – to freeze CO2 emissions at today’s level if renewable energy sources were exploited at full-scale. However, this would also require nearly double the investment volume. By contrast, emissions could be cut back by almost as much, but at no extra cost, if one third of China’s coal-fired power plants were replaced by modern gas-fired units by 2030.

All interim analyses of the results yielded by the local studies of Europe, Russia, the United States, China, the Middle East and South Korea are available for download here, as are the findings of the full study: www.siemens.com/wec