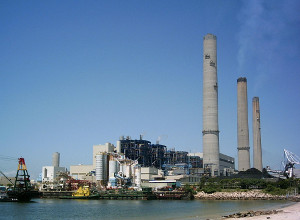 A plan proposed this week could see Hong Kong‘s power producers making deep cuts to emissions from four of the city’s power plants.

Caps on emissions of SO2, NOx and particulates would be lowered by up to 17 per cent under the proposed plan, which is set to be discussed at a meeting of the Legislative Council environmental affairs panel next week, according to Chinese media reports. à‚

The plan would come into effect in 2020, when the city aims to shift its fuel mix to get 50 per cent of its power from natural gas under a policy announced earlier this year.

Under the plan, utility Hong Kong Electric’s 3.7 GW coal-fired Lamma power plant (pictured) would need to cut emissions by up to 28 per cent, while the three plants operated by the CLP group, which total 6.9 GW and are fuelled by a combination of coal, gas and diesel, would together need to make cuts of up to 12 per cent.

A statement from the Environmental Protection Department said: “The reduction will help improve air quality given that emissions from the electricity sector accounted for 47 per cent [SO2], 31 per cent [NOx] and 16 per cent [particulates] respectively of the territory-wide emissions of these pollutants in 2013”.

Hong Kong Electric and CLP were both quoted as saying that the new standards would be “extremely challenging” to meet. à‚