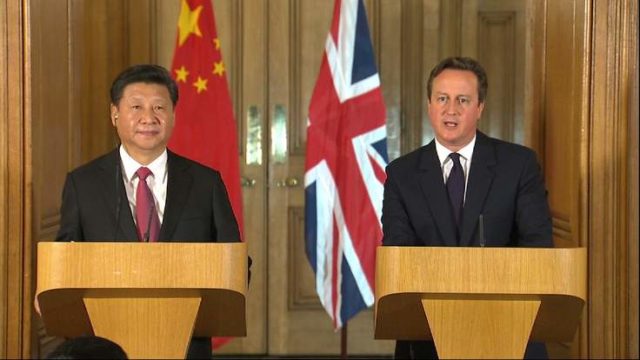 Works on the Hinkley Point C nuclear power project in western England are set to commence “within weeks” after a multibillion pound deal between French energy group EDF and China’s CGN was unveiled on Wednesday.

After lengthy and intense negotiations the Chinese partners agreed to accept a 33.5 per cent stake in the £18bn project in Somerset, and take a lead role in the design and construction of a future plant at Bradwell in Essex, also in England where it will take a 66.5 per cent stake.

The news was confirmed at a press conference by Prime Minister David Cameron and Chinese President Xi Jinping this afternoon. Cameron hailed the “historic deal”, which he said would provide “reliable, affordable energy” for six million homes.
A final investment decision on the nuclear power plant will be signed by French state-owned majority stakeholder EDF in the next “few weeks”, Vincent de Rivaz, the company’s chairperson said. The EDF board will need to give final approval once the “long form” of the agreement is finalized.

EDF chairman Jean-Bernard Levy was also bullish about the prospect of the project finally making real progress, telling the press “We are planning for a final investment decision within weeks so that we can move forward with construction.”

At this juncture it remains to be seen whether an objection filed by the Austrian government objecting to the project, will have any impact on its development, although initial reports forecast such an action could delay the plant for a further four years.

Contracts with suppliers including France’s Areva, Alstom and Bouygues have also been agreed. EDF said the project would employ 5,600 at its peak. Some 60 per cent of the project’s value would be spent in the UK.

There are also concerns about the possibility of Chinese involvement in the UK’s infrastructure compromising its national security.

However the UK’s need for a clean and viable energy alternative has become particularly acute. The government is debating closing all its 12 coal-fired power plants by 2023 at the same time as it’s facing a squeeze on supplies. EDF’s 1.2-gigawatt Sizewell B plant is the only one of the nation’s current 15 reactors scheduled to generate beyond 2023.

China General Nuclear’s £6bn investment is then a subject of great relief after the protracted period of negotiation and delay in reaching this stage.

“CGN is highly committed to delivering safe, cost efficient, and sustainable energy and to supporting the UK’s goal of becoming a low-carbon society.”

“We need to see more countries learning from the UK’s example to support nuclear energy among a mix of generation technologies that are fit for the future. Governments must act to ensure that markets support new investment in technologies such as nuclear, the UK is showing one way this can be achieved.”

The deal represents an industrial breakthrough for China, which has the world’s largest domestic programme of building nuclear power plants but has little experience in international projects.

The companies also agreed to develop a 1 GW plant at Bradwell which would use Chinese nuclear technology. CGN plans to take a 66.5 percent stake with EDF taking the remaining share, de Rivaz said. Once licensed, the technology could be used jointly abroad, he said.

The final investment decision for two Sizewell reactors won’t be made before 2018, EDF said. It may take at least three years to get the new Chinese technology for Bradwell approved by U.K. authorities, meaning that a firm order for the reactor’s construction won’t happen for five or six years, the company said.