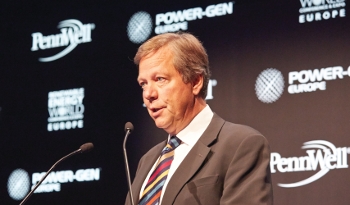 The Executive Chairman of Advanced Power, Martin Giesen says his company still foresees a role for traditional conventional power in Europe but as an insurer rather than a commodity.

Responding to a question from Stephen Sackur at the plenary panel discussion at POWER-GEN Europe on whether traditional utilities’ prospects were irreversibly negative in the light of the march of renewable power, Giesen said his own company’s strategy is based on a positive vision in acquiring more power plants within the EU.
“Within the EU there is a huge future of opportunities in acquiring existing plants – the ownership structure will change. Utilities focused on running generation plant have moved away from that and will continue to move away – you see that with the split of E.ON –they are looking for much steadier business. We are looking at ownership of generation plant which is a risky but interesting business.”

While much of the industry is gearing up for a future where traditional utilities utterly transform into service providers, Giessen elaborated what suddenly looks an unorthodox vision.

“There is a requirement for when the wind doesn’t blow and the sun doesn’t shine. That is the opportunity right now for gas-fired power, not for coal. There is nothing wrong with selling insurance. In the past, power was not sold as insurance but as a commodity. In the future, there will be a bigger insurance component but with good money in it. Will it require infrastructure in some places? Yes it will.”

Later in the discussion, the question was posed as to how power market would value reliability (in the context of renewable intermittency) differently and Giesen took the opportunity to reinforce the point.

“That was my point about insurance. If the lights go off there will be a capacity mechanism designed to protect that or minimise the risk of that. In Belgium and the UK in particular the risk of big outages are not acceptable, politicians won’t want to be voted out and mechanisms will be put in place –steps will be taken to prevent that from happening.”

Giessen further reinforced his belief in that scenario by pouring cold water on the current and near future potential of much-heralded energy storage.

“Storage is far away from solving my insurance problem – big for storage is 20 MW – it doesn’t compute.”

The Advanced Power also took aim at Europe’s policy makers for abandoning what he called ‘a perfectly good mechanism’, which could have helped Europe decarbonise in a more comfortable fashion – the ETS, or Emissions Trading Scheme.

“We’ve hugely misdirected our investment in Europe: pumped huge amounts of money into renewable energy particularly in Germany, which has a gigantic subsidy bill. Once we had an ETS which set a carbon target. What happened to that? Decarbonisation would have been achieved at a far lower cost – how did we lose sight of the actual target which was co2 emissions? If we had a c02 target and that was what we were really aiming for, then we’ve done a terrible thing and wasted huge amounts of money. If the target was to promote renewable energy, it worked but was an expensive business. How did we end up spending EUR20bn on something completely different?

Giessen was joined in the discussion by Stefan Singer of WWF, Koen Noyens of Eurelectric, Mark Garnett of Doosan Power Systems and Damian Wagner of Smart Cities Fraunhofer Group.

Singer earlier told the audience that conventional fossil-fuelled power’s days were over, but the path to more renewables would still face resistance.

“Fossil fuels will be phased out at different speeds, with gas as the most low carbon fuel, the latest. It would be naïve to think this will be a rapid process as most of the assets and investments still revolve around these interests and these guys won’t let them go easily. There might be role for CCS, but current prices for fossil fuels are prohibitive.”

Meanwhile Damian Wagner had a more positive and inclusive message in how utilities can adapt. He said the experience and knowledge contained within these organisations mean they have a real value in the evolving landscape.

“In terms of the conventional model and how that’s looking for new business cases – there is a big shift in the energy sector in providing energy services and making use of the knowledge and valuable data utilities possess will prove to be valuable to (smart) cities. I hope cities will work together with utilities a lot more.

That positivity also extended somewhat to the chances of carbon capture and storage becoming influential, and not just a failed experiment.

In response to moderator Sackur’s questioning as to whether CCS was commercially at the scale required to make typical gas and coal plants carbon neutral, an audience member from the industry said that a Sask Power executive had recently said that if their Boundary Dam project was repeated, costs would be 30 per cent lower this time round.

Mark Garnett of Doosan Power said the European energy sector was being damaged on an ongoing basis through failure to develop the grid.

“It’s around EUR40bn in losses a year through not interconnecting the grid properly.”