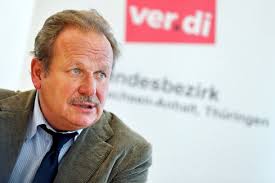 The head of the major German union, Verdi, or Vereinte Dienstleistungsgewerkschaft, says the country will shed around 100,000 jobs if the government goes through with a climate levy to be imposed on coal-fired power stations.

Frank Bsirske said there would be massive protests after Easter to protest against the policy.
Bsirske says Economy Minister Sigmar Gabriel is risking a structural collapse of the lignite fields in the Lusatia and Rhineland regions.

By 2020, emissions from power stations have to be reduced by an extra 22 million tonnes of carbon dioxide in addition to already planned reductions in other areas.

In order to achieve this, Gabriel is planning a climate levy on fossil-fuel power stations more than 20 years old that exceed their permitted level of carbon-dioxide emissions.

Gabriel and Chancellor Angela Merkel have said that by 2020 they want to reduce Germany‘s greenhouse gas emissions by 40 per cent compared to 1990 levels. The figure reached to date is 27 per cent.