The recent acquisition of Alstom Power has allowed GE to make a significant leap forward in terms of the comprehensive portfolio it can now offer the power industries.

Pascal Schweitzer, General Manager Europe for GE’s Power Services business spoke to Power Engineering International on the fringes of the POWER-GEN Europe conference in Milan on Thursday. He explained the difference in GE’s character, pre and post-Alstom and the excitement the company has about its digitisation offering.

The combination of challenges to conventional and nuclear power at present from renewable generation, low electricity prices and competition between thermal assets has not gone unnoticed at GE and the recent acquisition of Alstom expertise has given the company great belief that it has the tools to assist power companies to overcome difficulty.

“At a total plant level GE today completely different to the GE you knew before the acquisition of Alstom,” says Schweitzer. “Under the previous name as GE Power generation services, with the biggest fleet of gas turbines in the world, GE developed a good business around servicing and maintaining these gas turbines. At that time our thermal offerings were minor.”

“Now with the acquisition of Alstom we have brought in not only more gas turbines but Alstom’s total plant business – with balance of plant, HRSG services, a true deep water steam cycle as well as Alstom’s strong presence in coal plant maintenance. It’s more comprehensive now.”

Gas plants represent 50 per cent of total revenues for the company in Europe with the rest coming from nuclear and coal. GE has more than 5100 directly manufactured assets in Europe and the ability to service more than 90 manufactured brands, thanks to GE’s expanded toolkit following the Alstom purchase.

“Over the past decade had acquired a large number of different steam turbine makers, impulse technology, reaction technology, same for generators, same for boilers. The result is that GE has moved from being a gas turbine supplier to a supplier able to entertain power plant discussions with customers across all types of fuels and all technologies.”

Schweitzer is greatly enthused by the value GE can offer clients in the digital area, the recently released results in Whitegate, Ireland a case in point.

That new comprehensive capability to modernise and turn around older gas, coal and nuclear power plants is the key to the future for the company. The Whitegate plant saw sensors used to assess data across the board and meant the identification of over $1m in savings per year. Schweitzer says, “This is just the beginning.”

Probably less known is the Italian gas-fired power plant GE has managed to raise from the dead.

“The Chivasso CCGT plant that had been mothballed for three years and due to an overcapacity situation couldn’t be dispatched in a profitable manner. Now working with GE and providing an upgrade to the power plant and digital solutions we put together improved parameters to the plant including start up times, start up reliability and turn down ratio. We convinced the customer that the plant had moved enough along the merit order curve to justify de-mothballing it re-staffing it and the plant is being dispatched and is a key contributor to the grid today.

“This is what Predix is about – it’s an operating system designed for the industry with the ability to collect massive quantities of data, store this data in the cloud forever and then the ability to build in an easy manner an algorithm in order to mine this data.”

“We are living in a world of slow growth so you need something to give an edge and everyone realises this digitisation is the way to do that.”

Commenting on the fossil plant scene in general Schweitzer sees a lot of potential for the company from a business perspective as well as helping to modernise the older fleets, and assist in the world meeting its climate change targets.

“Coal is not going to go away from Europe. If you look at Poland, Czech Republic and Germany coal will continue to play a big part in the overall electricity production of Europe for the next decades and now the potential to improve the performance of these older coal assets is very significant – when we talk about COP21 and a new European target in terms of emission levels I think we can do a lot with upgrading those older assets. We see a big business opportunity.” 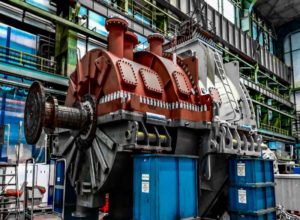