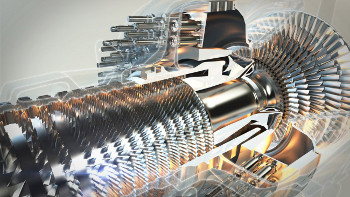 The growing availability of natural gas and its use in power production are set to give a boost to the global gas turbine market, according to a new report, while the outlook for steam turbines is mixed.

Frost & Sullivan’s analysis, Global Gas and Steam Turbine Markets, reports that the worldwide market for gas and steam turbines earned revenues of over $32.5bn in 2013, and predicts growth to almost $43.5bn in 2020.

But growth in the two market segments will not be equal. Due to factors including the growing trend toward replacing aging coal plants with modern gas-fired power stations and the need for more flexible generating assets due to renewable energy coming onto the grid, gas turbines are predicted to gain the edge over steam turbines.

“Although the current profitability of gas-fired generation is low in regions such as Europe, gas turbines will be the technology of choice for future capacity additions,” said Frost & Sullivan Industry Director Harald Thaler. “Gas turbines will also benefit from increasingly stringent emissions legislation and rollout of emissions trading schemes in emerging markets, as they curtail the growth of steam turbines.”

Thaler warned that the steam turbine market “is expected to experience significant consolidation” in the next decade due to a large number of manufacturers and the growing globalization of Chinese OEMs. “Comparatively, the gas turbine market will see limited acquisition activity beyond the recent Siemens-Alstom merger,” he said.

However, the news isn’t necessarily bad for steam turbines: the report also found that the global steam turbine market is currently experiencing a surge in demand due to large coal-fired capacity additions in emerging markets such as China and India. An increase in the number of combined-cycle gas turbine (CCGT) plants, expansion of nuclear power and upgrading of coal plants with supercritical and ultra-supercritical technology have contributed to opening up the market for steam turbines, Frost & Sullivan said.

China, which is aggressively promoting gas turbine plants with the goal of reducing its dependence on coal and diversifying its fuel mix, is expected to become the leading gas turbine market as traditional leader the Middle East gradually declines.

Meanwhile, China’s share of the steam turbine market is predicted to fall over time, although the nation will remain dominant in the market. India’s market share is predicted to grow once it resolves its coal shortage issues. Southeast Asia will also experience strong growth as it looks to coal to reduce gas dependence across the region. The European market is predicted to remain weak due to uncertainty over future power demand growth and utilities’ financial woes.