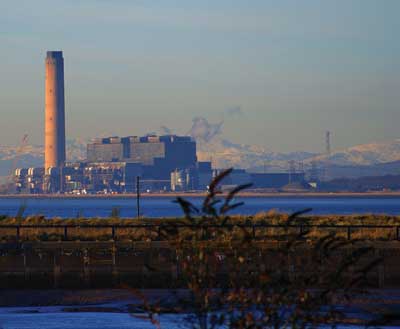 Longannet, one of the largest coal-fired power stations in Europe, is in danger of closure.

Scotland‘s energy minister says the coal plant is not economically viable under present circumstances. The vital plant generates enough electricity each year to meet the needs of more than two million homes.

It has emerged that Longannet may have to close owing to the à‚£40m cost its operator pays to connect to the National Grid and operator Scottish Power said Longannet’s Fife location puts it at a disadvantage when competing against English plants.

Scottish Power has decided not to enter the contest to supply energy generating capacity in 2018/19, arguing financial changes are needed to avert the threat of closure.

The UK’s transmission charging regime is designed to encourage the power companies to invest in generation capacity close to the largest centres of population in central and southern England.

Scotland’s energy minister Fergus Ewing said that the plant was being priced out of the market: “UK energy policy and regulation has endangered security of supply, has damaged investment in renewable energy and now threatens Longannet.

“During the referendum campaign the UK government made much of the so-called benefits of the UK for energy policy but the reality on the ground is now plain for all to see.

“The UK government has completely failed to manage the electricity system properly and unfortunately the consequences are now being felt. We need an urgent rethink on policy for baseload capacity and reform of the UK transmission charging system. I will be writing to UK Energy Secretary Ed Davey to seek an urgent meeting to discuss the future of Longannet and wider energy security,” he added.

A Department of Energy and Climate Change spokesman said: “Energy transmission is something the UK government takes very seriously and Scotland is set to benefit from critical investment of up to à‚£6bn between 2013-21, nearly 30% of total earmarked for upgrades across Britain.

“Ofgem has also approved a significant change that will reduce future charges in Scotland, which is planned to be introduced from April 2016.

“This is on top of the reductions consumers in remote regions of Scotland receive to offset higher transmission charges, with the costs spread across millions of UK bill payers.”

Meanwhile, also in Scotland, EDF Energy says fractures found at nuclear power plant in Ayrshire do not carry safety implications and are well within any limits for safe operation.

Cracks have been found in one of the reactors at the Hunterston B nuclear power station, according to the BBC, but the plant’s operator says the cracking was predicted to occur as the station ages and would not affect the safe operation of the reactor.

Two of about 3,000 graphite bricks in the core of reactor four at Hunterston are affected.

Colin Weir, station director at Hunterston, said: “The graphite core is made up of around 6,000 bricks. During the outage we found two bricks with a new crack which is what we predicted during Hunterston B’s lifetime as a result of extensive research and modelling.

It will not affect the operation of this reactor and we also expect that a few additional cracks will occur during the next period of operation.

The cracks were discovered in August and the reactor returned to service on Sunday evening, after the energy firm received approval from the Office for Nuclear Regulation.

Hunterston began operating in 1976 and its working life has already been extended to 2023 – well beyond its planned closure date.