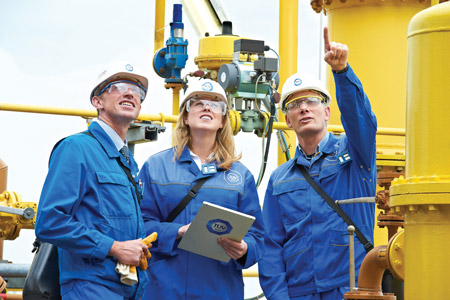 Frequent startup and shutdown procedures, operation far below the design limits, rapid load cycles – the demands that are made on some thermal power stations today differ drastically from those for which they were originally designed.

Many of these power stations were planned and constructed at a time when solar and wind power played only a minor role, if any, in energy production.

The use of conventional power stations has changed fundamentally in the wake of the energy transition, with solar and wind power stations accounting for an increasing share of total energy production.

However, the distribution of this share over time is not consistent and cannot be planned; it fluctuates depending on the intensity of solar radiation and wind speed. Thermal power stations, in turn, must offset these fluctuations.

As electricity from renewable sources takes priority in the grid, thermal power stations can no longer be operated at full load. In practice, this means that these power stations are operated at partial load but may have to increase their energy production drastically at the blink of an eye, necessitating adjustments in the mechanical, process engineering and control systems. However, the primary consequence of these cyclic loads is their significant impact on materials, and thus on servicing and maintenance.

At power stations with a more flexible mode of operation, the focus must be far more on operation-oriented maintenance than in the past. Plants and components operating under both constant and cyclic load require a completely different maintenance strategy from plants and components that operate constantly under full load. In case of creep strain, i.e., under continuous operation, condition-based maintenance of the materials used so far is relatively simple.

In most cases, the period between initial identification of the first signs of damage to the point in time when repair must be implemented is long enough to take the required actions. However, operation of the same plant under cyclic load increases the demands imposed on maintenance, and the complexity of its processes. Rapid load cycles can accelerate material fatigue and damage previously inconspicuous components. This may also have economic consequences, as the service life of existing power stations was calculated for operation under full load with limited cyclic load.

Nevertheless, older plants are frequently highly suitable for a more flexible mode of operation. First of all, they are already amortized in full, so that operation even under partial load still makes economic sense.

Secondly, many of these older plants include less complex technological systems, making them more robust and tolerant to load changes. In addition, these plants were generally designed for operation under constant load with few startup operations and an assumed annual operational period of between 8000 and 8500 hours under full load. As energy production has become more flexible, these plants remain significantly below these total hours of operation, so that creep fatigue increases only slightly.

However, a more flexible mode of operation exposes certain components to higher cyclic loads, requiring more detailed monitoring of components, e.g., in the form of online monitoring. In this context, previous inspection results and methods – particularly their limits of acceptability and the probability of fault detection – must be reviewed critically. In principle, plant operation can be continued in the presence of faults, provided sufficient information about the status and the criticality of the fault plus the availability of reliable means of monitoring are ensured.

To be able to assess the possible risks involved in increased load changes, TÜV SÜD always recommends calling in third-party experts to examine the actual condition, the design and the method of life testing of an existing power station. This approach helps to detect existing weaknesses, in conjunction with which damage may be caused by higher stress concentrations.

In addition, changed aging processes and operating conditions resulting from the load changes can be accurately analyzed and classified with the help of various tools such as probabilistics, fracture mechanics and the finite element method.

The results provide a solid basis for deciding whether the operation of a plant with faults can be continued or not. For components whose conditions are known and can be assessed because they are subject to continuous and reliable monitoring, continued safe operation under defined conditions may be possible.

Analysis of the technical condition of the entire plant gives owners and operators clarity about the possibilities of more flexible operation, and about the risks these possibilities involve and the measures they require. At the same time, this type of analysis forms the basis of a new and adjusted maintenance strategy.

Germany‘s energy transition is a project unparalleled in any other industrialized country of this size throughout the world.

From a long-term perspective, its aim is nothing less than meeting the country’s entire energy demand with power from renewable sources, while keeping energy costs and business and industry competitive.

This impacts on consumers, but also on industrial production and infrastructure. And in all of the above areas, a lot remains to be done. The technological challenges alone are enormous, including requirements imposed on power grids and their expansion, storage systems and the still indispensable large-scale conventional power stations.

What are the specific risks involved in energy transition? Fluctuating energy from renewable sources that is supplied to the grid leads to voltage fluctuations time and again, damaging sensitive production facilities.

When grid stability is at stake, there is a threat of blackouts. The competitiveness of many conventional power stations is also coming under close scrutiny. More flexible plant operation not least requires a paradigm shift in the maintenance strategies of these plants. At present, the primary task is to integrate energy from fossil and renewable sources, including interconnections with neighbouring countries that pursue different energy strategies.

Nevertheless, it is important that we regard the multi-faceted challenges related to energy transition as an opportunity. The findings gained will also help Germany to carve out the role of a pioneer in these technologies. It cannot be excluded that we will also have to learn from mistakes, a characteristic feature of innovation processes.

The crux will be how energy policy and national economy will reconcile new and existing technologies. In this context, reliable legal framework conditions should be one of the key success factors. Here, engineers, companies and scientific organizations are called upon to advice government and the world of politics and develop solutions that may also provide incentives for investments.

A factor not to be underestimated when it comes to a more flexible mode of operation of existing power stations is the experience and deployment of personnel. Over recent years, some organizations have reduced personnel to meet the growing cost pressure in the energy industry.

However, it is precisely this decision that results in the adverse consequences visible at many plants. In cases where plant utilization is to be changed significantly, hands-on experience and detailed knowledge of the plant may be key success factors for the continued operation of an older power plant under new framework conditions.

When implementing changes in a complex plant, owners and operators repeatedly face possible faults and unexpected events, which are most effectively addressed by personnel with years of experience and in-depth familiarity with the systems. This knowledge is also crucial for meeting the new maintenance-related challenges, and owners and operators should do everything to retain this knowledge at the plant.

Less operation under full load, more flexibility, changes in the maintenance strategy – adopting a new, comprehensive approach makes all of the above possible. Given this, we need to transform our existing baseload and mid-load power plants into more flexible generating units and continue to operate them efficiently, profitably and also safely throughout the period of energy transition. This involves new challenges for the maintenance companies, operators and employees. To manage these challenges, maintenance must focus on power station operation and its analysis. By taking this approach, we make sure that we will be prepared for any new modes of operation that may be required by future changes in framework conditions.