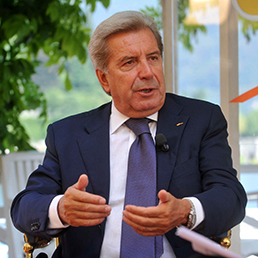 Ten utilities that provide over half of Europe‘s current power generation capacity have called on the European Union to re-examine its position on renewable energy policy and realise that the bloc’s energy security is at stake.

At a press conference, the companies, which include Germany’s EON (FWB:à‚ EOAN), RWE AG (FWB:à‚ RWE), France’s GDF Suez (Euronext:à‚ GSZ) and Italy’s Eni said that current policy on energy and climate change is having an adverse effect on investment.

“In the EU, companies pay three times the price of gas in America, twice the price of power,” Eni SpA (ENI) Chief Executive Officer Paolo Scaroni said at the media briefing in Brussels. “How can we dream of an industrial renaissance with such a differential?”

Enel SpA (ENEL) Chief Executive Officer Fulvio Conti (pictured) called for an end to “Robin Hood” taxes and aid. “I’d rather see the Sheriff of Nottingham for most of the legislation. Let’s restore normal and eliminate state intervention and subsidies.”

Brussels initiated a debate in March on formulating a new set of climate and energy rules as the bloc seeks to curb greenhouse gases while retaining energy security.

A framework for the decade to 2030 is needed to give investors legal certainty, spur innovation and prepare for a global climate deal, the European Commission said in a consultation paper at the time.

GDF CEO Gerard Mestrallet said. “Without a carbon signal, we will not have any visibility, and we will not be in a position to invest.”

The collapse of the carbon price has made coal one of the cheapest power sources. The switch to coal and requirements to buy renewable power have perversely sapped the profitability of natural-gas-fired plants, leading to the widespread shutdown of gas plants, despite it being the cleaner option.

51 GW of the bloc’s electricity capacity is mothballed, equivalent to the combined capacity of Belgium, the Czech Republic and Portugal, according to a brochure at the event.

Energy consumers should be billed only for energy, said EON CEO Johannes Teyssen who pointed out that at present European consumers help pay for subsidies to promote renewable-power generation through larger energy bills.

“More than 50 per cent of the bill European consumers are paying today has nothing to do with power generation and networks, and that’s because of political decisions,” said Iberdrola’s Ignacio Galan. “That has already created a lot of distortions.”

Energy bills rose 17 per cent in four years for domestic consumers and 21 per cent for industrial consumers, the utilities said in the brochure.