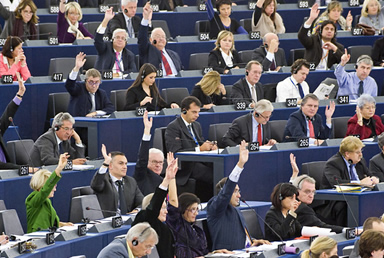 The European Parliament has, after a long period of negotiation, agreed a deal on reform of the bloc’s Emissions Trading System (ETS) for post-2020.

The challenge was to find an economically and environmentally sound compromise among 28 member states with differing energy sources and took two years to complete. It was reached in time for the United Nations annual climate meeting, where the EU aims to push for more aggressive ways to combat pollution. Envoys from more than 190 countries are in Bonn for two-week talks on the implementation of the Paris Agreement to cut greenhouse gases blamed for global warming.

Welcoming the political agreement, Commissioner for Climate Action and Energy Miguel Arias Caàƒ±ete said: “Today’s landmark deal demonstrates that the European Union is turning its Paris commitment and ambition into concrete action. By putting in place the necessary legislation to strengthen the EU Emissions Trading System and deliver on our climate objectives, Europe is once again leading the way in the fight against climate change. This legislation will make the European carbon-emissions market fit for purpose. I welcome in particular the robust carbon leakage regime that has been agreed and the measures further strengthening the Market Stability Reserve.”

The EU Emissions Trading Scheme puts a cap on the carbon dioxide (CO2) emitted by more than 11,000 installations in the power sector and energy intensive industry through a market-based cap and trade system.

Building on the Commission’s proposal, the main improvements agreed by Parliament and Council include:

Significant changes to the system in order to speed up emissions reductions and strengthen the Market Stability Reserve to speed up the reduction of the current oversupply of allowances on the carbon market;

Additional safeguards to provide European industry with extra protection, if needed, against the risk of carbon leakage;

Several support mechanisms to help the industry and the power sectors meet the innovation and investment challenges of the transition to a low-carbon economy.

Late on Thursday, negotiators provisionally agreed to the restrictions on the so-called Modernisation Fund (aimed at poorer member states).As a result, the fund won’t support coal-based utilities except for projects in the poorest member states that invest in district heating.

They have agreed on doubling the rate at which the scheme’s Market Stability Reserve (MSR) soaks up excess allowances, as a short-term measure to strengthen prices. A new mechanism to limit the validity of allowances in the MSR will become operational in 2023.

The overall cap on the total volume of emissions, known as the linear reduction factor (LRF), is due to be reduced annually by 2.2 percent.

The reform will strengthen a tool to alleviate a market glut that slashed the price of emission permits by almost 70 percent over the past nine years. The number of allowances swept into the so-called Market Stability Reserve will double over a five-year period starting in 2019. From 2023, permits in the reserve will start expiring if they exceed the amount sold at auctions in the previous year. Nations will also have the option of cancelling permits linked to power plant closures.

“ETS is improved; but won’t be the flagship for EU climate policies,” Bas Eickhout, lead lawmaker from the Greens group in the EU Parliament, said on Twitter. “Additional national and European policies remain essential.”

“Investors across Europe have received the much-needed legal clarity that will enable them to take better informed decisions on low-carbon investments,”à‚ said EURELECTRIC Secretary General, Kristian Ruby. “The deal sends a timely message of EU climate leadership that coincides with the ongoing COP23 climate conference in Bonn. It also restores confidence in the long-term functioning of the EU ETS in time before the entry into operation of the MSR,” he added.

The deal is subject to approval by ambassadors representing EU national governments. If it gets the green light, it will need support from the EU Parliament and ministers from member states to take effect.