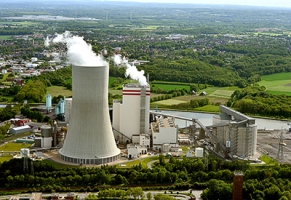 The plant (pictured) was built as a turnkey unit under a consortium comprising Siemens and IHI Corporation of Japan.

Lunen has an installed electrical capacity of 750 MW and an electrical efficiency approaching 46 per cent. This, according to Siemens, makes Lunen the cleanest and most efficient hard-coal-fired power plant in Europe.

The plant also feeds heat into the city of Lunen’s district heating network.

Lunen features a model SST5-6000 steam turbine, a model SGen5-3000W generator, the complete electrical installations, and the SPPA-T3000 instrumentation and control system – all supplied by Siemens.

According to Siemens, the SST5-6000 steam turbine not only guarantees high efficiency operation in baseload; but its design characteristics also make it ideally suited for highly responsive ramping.

“The energy transition in Germany means we need the right balance between power plants delivering constant baseload and fluctuating power from the renewables,” explains Manfred Ungethüm, managing director of Trianel. “The high-efficiency coal-fired power plant in Lunen is a mainstay of the energy mix in the state of North-Rhine Westphalia.”