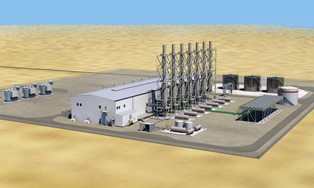 The plants will have a combined capacity of 104 MW and will operate in extreme conditions of up to 52 Celsius degrees.

Wärtsilä says that its internal combustion engines are suitable for the plants because they can “maintain high efficiency in extreme temperatures and their water consumption is negligible”.

The larger of the two power plants (pictured right in an artisit’s impression) will be located on the island of Masirah on Oman’s east coast. It will consist of seven Wärtsilä 32 engines, having a combined output of 56 MW.

The other power plant will be located in Saih Al Khairat and will have six Wärtsilä 32 engines with a total output of 48 MW. Both units will be operated using light fuel oil and are scheduled to be operational in 2016.

“They also illustrate our performance in hot and dry conditions.”

Wärtsilä recently announced a 120 MW distributed power generation project in the Musandam governorate of Northern Oman and its total installed capacity in the Middle East is approximately 7000 MW.

Can you trust the quality of non-OEM approved engine lubricants?