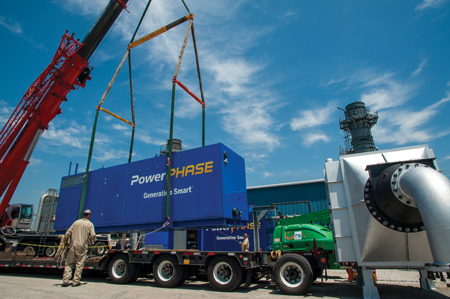 China has always been thought of as a coal market, but increasingly the largest nation in the world is adding renewables and flexible gas turbine technology to reduce emissions and diversify its energy portfolio.

China’s gas power generation capacity is expected to rise from 43.8 GW in 2013 to 85.5 GW by 2020, substantially boosting gas turbine installations in the country. The growth will be driven by China’s need to adopt cleaner fuels for power generation, including renewables, and reduce its reliance on coal, which accounts for 62 per cent of the country’s total installed capacity.

China’s gas power generation market value stood at $652 million in 2013 and is forecast to jump to almost $1.7 billion by 2017, according to the analysts at consultancy GlobalData.

At the same time, China has increased its investment in renewables nearly every year for the past ten years. New renewable power capacity surpassed new fossil fuel and nuclear capacity in China for the first time in 2013. China’s goal is to have 20 per cent of its total energy demand sourced from renewable energy by 2020.

Given the convergence of gas turbines and renewables in China, the nation’s gas turbine plants will require more flexibility. The more renewables that are added, the more flexibility will be required. Gas power plants are often ramped up and down, or cycled, in response to changes in demand and load. The time required to ramp up and down, the plant’s efficiency at part load, and the overall duration of plant output determine the fuel consumption and economic performance of the power plant.

Unlike baseload plants that operate continuously, flexible power plants can provide short-duration load, or burst load. Burst loads are produced in response to the sudden loss of a power generator, reduced output from wind and solar sources, or spikes in demand. Fast, flexible generation improves reliability and power quality by stabilizing the electric grid, allowing more renewables to be added over time.

The startup time, the time to ramp up output to full load, the minimum available load, and the efficiency at part load determine the amount of fuel consumed and the length of time the plant operates each day. By producing output during peak demand times, the power plant is more valuable to the grid because of its ability to balance variable renewables.

Being able to start quickly and run at a low minimum load will allow the plant to operate efficiently more often and meet a larger range of demand requirements. In the modern power grid, intelligent resources should be able to ramp up and down as fast as possible without risking damage to the power plant equipment.

A CCGT equipped with Powerphase’s Turbophase Flex capacity and flexibility upgrade combines the fast start and burst capability of a reciprocating engine with the efficiency and scalability of a CCGT.

The Turbophase Flex Enabled CCGT plant can add megawatts to the grid in 60 seconds, and can offer the predictability of ISO-rated output at all ambient conditions. For example, a nominal 569 MW 2×1 CCGT equipped with the upgrade will produce 569 MW on a 0à‚°C day and 569 MW on a 50à‚°C day. When comparing price, looking at the average number of kilowatts produced throughout the year, the Turbophase Flex Enabled CCGT will cost less on a $/kW installed basis than the standard OEM CCGT.

Powerphase president Bob Kraft says: “As the market begins to understand the full value of what we’re offering, decision-makers will come to view the Turbophase Flex Upgrade as standard equipment when adding new gas turbines to the grid.”

He adds: “Planners analyze capacity additions based on cost per kW, efficiency and, increasingly, the ability to respond quickly to load fluctuations.

“When they look at a Turbophase Flex Enabled CCGT versus a standard CCGT, they are seeing more capacity, more efficiency, and more flexibility at a lower total cost per kW installed. Increasingly they’re going to say, ‘If the cost per kW is lower, and I’m getting all these added benefits, why wouldn’t I add the upgrade?'”

While a typical CCGT requires about 60 minutes to reach full load, a Turbophase Flex Enabled CCGT plant can add capacity to the grid in 60 seconds. The rapid Turbophase Flex start eliminates much of the need for inefficient low-load conditions at the CCGT plant, reducing the overall fuel burn. It also increases the range of output the plant can offer to the grid, both at the low end and high end of the range, increasing the megawatt-hours the plant will dispatch over the course of the year and boosting economic value.

In addition to pioneering its new technology, Powerphase has pioneered an innovative way to pay for its capacity and efficiency upgrade. Dubbed a ‘Power Service Agreement’, customers who choose this option pay one monthly fee that includes installation, equipment, controls integration and maintenance. The company says it can make sense in cases where a customer wants to avoid CAPEX expenses and would rather see positive cash flow immediately and throughout the contract.

Many power plant owners globally have been considering ways to realize more value from their assets. In real operating conditions, megawatt-hours is one of the most important economic considerations when evaluating the return from a project.

China is an example of a forward-thinking power grid that is diversifying rapidly into renewable generation. In that context the Turbophase Flex Upgrade is likely to see widespread adoption in China and other innovative markets because of its ability to start in 60 seconds for balancing renewables, while improving the efficiency of reliability of gas turbines.