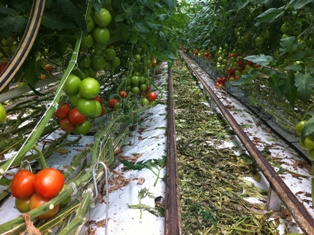 The installation of a CHP system running on gas engines has sown the seeds for significant savings at a tomato-growing facility in Belgium.

The system, running on Perkins gas engines and installed by Belgian company E. Van Wingen (EVW) , is already making a difference to the facility, which is just outside Ghent and produces 600 tonnes of tomatoes a year.

Previously it used central heating to warm its greenhouses ” now heat from the 500 kW engine is pumped back into the greenhouse.

“Everything that comes out of the engine goes into the greenhouse,” said EVW boss Jean-Pierre Van Wingen.

Perkins and EVW have also collaborated on two other recent projects in Germany. At Euro Pool Systems in Bornheim, near Bonn, and Biogas Oberhessen in Wàƒ¶lfersheim, near Frankfurt, EVW installed in-house engineered and built CHP units ” running on natural gas and biogas respectively ” which are being serviced by the German distributor BU Power Systems.à‚

Euro Pool Systems cleans fruit crates at a rate of 7500 an hour and the Bornheim plant marks the company’s first use of cogeneration. It benefited from a German tax reduction for CHP systems but added that it would have opted for system even without the tax break: “Cogen is the best system for our business,” said a company spokeman.

Biogas Oberhessen ” which uses silage and maize as biomass ” inaugurated its CHP system using the Perkins genset a year ago and since then has topped 8000 running hours.

EVW has strengthed its alliance with UK-based Perkins following the British company’s unveiling of a new gas strategy.

EVW is one of five companies chosen by Perkins to form a worldwide service network for the development of its gas business.

Perkins says this will give it a huge boost to strengthen its market potential.