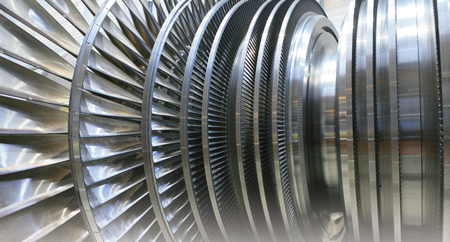 Steam and moisture entering bearing housings of steam turbines result in premature bearing failure. Chris Rehmann discusses why advances in bearing protection have the ability to eliminate this issue

Like many other types of rotating equipment, steam turbines have bearings that support the axial and radial loads. These bearings must be properly lubricated in order to achieve L10 lifecycle. Turbine bearings are exposed to high temperatures, high transient thrust loads, long states of idle readiness and a moisture-laden environment. These can be seen as severe operating conditions at best.

Of all operating environments, however, the state of idle readiness introduces the highest level of contamination exposure to a turbine bearing and lube oil system. That is because the rotor and, in most cases, the lubrication system is in a static state, which allows live steam leaks past the carbon shaft seals.

As the steam makes its way past the OEM labyrinth bearing housing seals, which function properly only in the dynamic state (when the shaft is rotating), it condenses on the cooler inner surfaces of the bearing housing and collects in the sump. When the turbine is put in service the bearings can fail prematurely due to this moisture contamination.

If the turbine has been idled for a very long period of time under these conditions, the bearings have already reached stage five failure on the P-F curve before the unit is put into service. The location of the escaping steam can be seen in the turbine cross-section diagram of Figure 1, showing the rather simple, stationary labyrinth isolators (in circles) which are provided by some OEM steam turbine manufacturers.

This dynamic lift technology uses the centrifugal force of rotating equipment to open a temporary micro-gap allowing expansion of the oil-air mixture in the bearing housing, which consequently allows the equipment to breathe. When the equipment stops rotating the micro-gap immediately closes, forming a perfect seal. This prevents steam, moisture and dust being sucked back into the bearing housing and eliminates bearing oil contamination.

The cross-section of a LabTecta steam turbine labyrinth isolator is shown in Figure 3. You can see that this seal also utilizes two drive o-rings, two shut-off o-rings that seal on a smooth surface, and easy refurbishment capability. But the steam-turbine isolator has two unique adaptations. First, a graphoil ring has been placed on the side nearest the steam to help protect the Aflas o-rings from the intense heat. Second, the design of the rotating unit has been changed to create a ‘steam deflector’ which repels the impinging steam.

LabTecta66 is also designed with a thinner cross section and seal length than competing devices, which means it can be retrofitted on more equipment without having to carry out modifications.

A recent research paper produced by AESSEAL analysed the 120,000+ LabTecta66 products that had been supplied in the eight years since the product’s launch. Between January 2006 and September 2013, only
52 of the 120,000+ LabTecta66 bearing protector seals were removed from service. After detailed examination, it was concluded that any abnormality was found to be operator based (such as mis-installation and lubricant overfilling). The research also conducted an accelerated life test with a stop-start cycle of four times a day, which determined that the average LabTecta66 life expectancy was over 10.5 years. The paper also showed that by using an established statistical (WeiBayes) technique, the average life expectancy was also in excess of 10.5 years. However, because such statistical data can only be modelled with failure data, and as no LabTecta66 has ever failed, the results must be viewed as conservative.

A US-based producer of phosphate fertilizer had faced an ongoing issue that, during normal operations, steam leaking past the carbon rings caused moisture ingress into the bearing housings. This had been occurring for a number of years and the engineers had found that the OEM standard, non-contacting labyrinth seals were not effective at preventing steam and moisture ingress. It was calculated that the Mean Time Between Repairs (MTBR) for the turbines was only four to 12 months with the OEM seals. Set against this was the turbine rebuild cost, which could be anything from $35,000 upwards. Several seal design changes had been tried to improve the ability of the OEM seals to exclude the moisture from the bearing housings, without success.

A Reliability engineer working for the company studied MTBRs and performed root-cause failure analysis on a wide range of rotating equipment failures (turbines, pumps, gearboxes, trunions, etc), and concluded that bearing failures were frequently caused by lube oil contamination resulting from the steam in the operating environment entering the bearing housings. The company’s Terry GAF4 steam turbines were suffering from water contamination of the bearings, leading to a MTBR of as little as four months. This had been a chronic problem for the last 40 years. Just replacing the bearings on this turbine costs $14,000. A full turbine rebuild costs about $35,000. An emergency rebuild in August 2010 of an Elliott EPG-4 turbine and 90P single stage compressor due to water related failure cost over $300,000. A solution was needed to stop this frequent and expensive damage.

To reduce moisture ingress and improve the MTBR of the turbine bearings, a number of modifications was attempted, including tighter running clearances of the OEM labyrinth seal; air buffer porting; low pressure reducing baffle; instrument air purging the oil reservoir, to prevent ingress of moist air; nitrogen purging the oil reservoir, to prevent ingress of moist air; desiccant vent filters, to dry the air entering the housing; vent check valves, to allow one-way flow of air from the housing; and synthetic lubricants, with improved moisture separating qualities. However, none of these modifications was completely successful and they resulted in several well-known after-market bearing isolators being investigated and tested. Most of these labyrinth isolators achieved some improvement over the OEM seal, but none fulfilled all of the requirements – the primary objective being no oil leakage out, and no water entry in.

The plant’s engineering team decided to try a set of three LabTecta66ST bearing isolators, which were installed on a Terry GAF4 turbine. The cost for these isolators was around $2400. The results exceed expectations by a considerable margin and the turbine was found to be running perfectly after 24+ months. It is estimated that this initial investment in an effective bearing protection system has avoided at least three turbine repairs over two years, with a total saving of $100,000. This results in a payback period on the initial investment of less than three weeks, with ongoing savings of $50,000 per year. Weekly oil samples taken from this steam turbine continue to show zero moisture in the oil. Turbines with LabTecta isolators that are taken out of service for other reasons have no corrosion and are found to be in pristine conditions inside the bearing housings.

Steam and moisture entering the bearing housings of steam turbines and other rotating equipment was a major source of costly failures at this plant. The OEM bearing protectors were found to be inadequate for the severe conditions surrounding steam turbines, a common problem worldwide.

The US-based producer of phosphate fertilizer had tried numerous housing design and lubricant changes to eliminate or at least minimize the effect of the water in the oil. The engineers then investigated and tested a number of different bearing housing seals and isolators, before they standardized on the modern labyrinth design shown in Figure 2 for its pumps and gearboxes, and Figure 4 for its steam turbines.

In conclusion, it can be seen that steam and moisture entering bearing housings can be prevented by modern labyrinth bearing protectors. These are designed to operate in the elevated temperatures and high transient thrust loads founds in steam turbines as well as preventing ingress during long states of idle readiness. Labyrinth bearing protection is therefore a highly cost effective method of extending MTBR and optimising ROI.