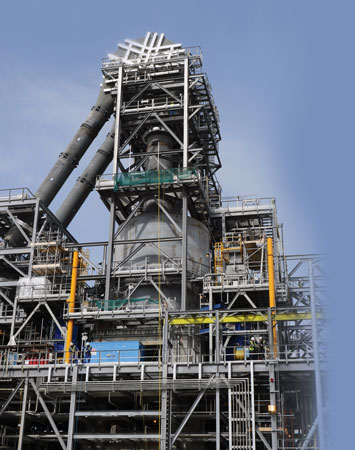 A plant that will convert 1000 tonnes per day of municipal waste to syngas and refueling gas turbines are two recent initiatives in the development of plasma gasification, writes Kal Bhojak of Westinghouse Plasma Corporation

Westinghouse Plasma Corporation (WPC) is working to make landfills obsolete through the deployment of its plasma gasification technology.

The WPC technology provides feedstock flexibility and creates an energy-rich syngas that can be used to create high value products such as power, liquids and chemicals.

WPC’s technology has been commercially operating for over 15 years in energy from waste (EfW) applications throughout Japan, India, China, and most recently the UK. Our plasma gasifier is capable of processing up to 1000 tonnes per day (tpd) of feedstock, and creating up to 3,500,000 GJ per year of energy-rich syngas. This volume of syngas can then be used to power a gas turbine in producing 50 MW of electricity, or the syngas can displace 670,000 bbl per year of traditional fossil fuels.

From an industrial scale power perspective, WPC is leading the way on two fronts. We have recently deployed two of our 1000 tpd gasifiers into the world’s first integrated plasma gasification combined cycle (IPGCC) facility. This facility, which is owned and operated by Air Products and Chemicals, will transform 2000 tpd of municipal solid waste (MSW) into 100 MW of gross electric energy.

The first 1000 tpd phase of the project is currently in commissioning and the second 1000 tpd phase is under construction. These twin EfW plants set a new standard in efficiency and environmental sustainability for EfW facilities.

The second initiative that WPC has recently undertaken is the refueling of existing gas turbines with waste-derived syngas. We have partnered with GE to evaluate this market opportunity and the results of feasibility studies have confirmed that the WPC syngas is an acceptable fuel for over 5000 of the GE turbines that are currently deployed globally. With the deployment of the UK plants and the refueling partnership with GE, WPC is well-positioned to lead the way in the next generation of utility scale EfW plants.

Our flagship EfW facility is being commissioned in Tees Valley in the UK, where the WPC technology has been deployed. The first plant will convert 1000 tpd of municipal waste into approximately 3,500,000 GJ per year of clean syngas that will fuel gas turbines in combined cycle mode.

Combined-cycle power plants, like Tees Valley 1 and 2, have efficiencies of 45 per cent to 50 per cent, whereas traditional incineration technologies convert waste into steam cycle power, with efficiencies of less than 30 per cent. The IPGCC facility in Tees Valley is the first of its kind and will set the standard for efficiency and environmental sustainability in the EfW marketplace.

The Tees Valley facilities will create around 7,000,000 GJ per year of syngas that will feed two gas turbines in combined cycle mode to produce 100 MW (gross) of electricity – enough to provide electricity to over 100,000 homes. Tees Valley is the first EfW facility in the world that will fuel a gas turbine with syngas derived from waste. This represents the new standard in efficiency and environmental sustainability for EfW plants globally.

The compressed syngas generated at the Tees Valley facilities is also applicable to brownfield projects, where an existing gas turbine is consuming high-cost fossil fuels.

WPC has been working with GE to confirm the suitability of our syngas to refuel their gas turbines globally. GE’s simulationp results confirmed that, in all cases, the WPC syngas was found suitable for the GE turbines in either a blend or a full fuel replacement scenario. In addition, the gas turbines were found to produce incremental energy when fired on syngas compared to natural gas, as illustrated in Figure 1. To capitalize on this opportunity, we are working with GE, which has over 5000 6-Series, 7-Series, and 9-Series gas turbines deployed globally, all of which are potential targets for fuel replacement using WPC syngas.

The WPC plasma gasification technology is the most advanced waste thermal treatment technology. It enables the conversion of difficult feedstocks, such as MSW and hazardous waste, into a clean, energy-rich syngas. This syngas is suitable for use in advanced downstream energy production technologies, such as high efficiency gas turbines or next-generation liquid fuels production. In most global markets, the WPC technology provides a low- to zero-cost alternative to fossil fuels.