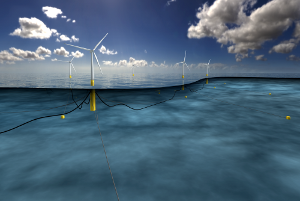 A lease for the 30 MW Hywind project at Buchan Deep, 25 km offshore from Peterhead in Aberdeenshire, was granted this week by the UK’s Crown Estate.

Work is expected to begin later this year, with erection of the turbines planned for 2017. Once completed, the wind farm is planned to power around 20,000 households.

Statoil said it had based the design of the floating turbines on its experience with floating offshore oil and gas platforms. A “slender cylinder” steel structure was chosen as “the most feasible and economical” design for the floating turbine base, the firm said.

The design is turbine-independent, according to Statoil, which added that it could be used with any offshore wind turbine as long as the combined weight of the nacelle and rotor remains within marine stability requirements.

Each turbine will be ballast-stabilized and anchored to the seabed with a mooring system consisting of three mooring lines attached to anchors.

The turbines will feature pitch motion controllers integrated with the overall control system.

“This pilot project is expected to demonstrate the feasibility of multiple floating wind turbines in a region that has optimal wind conditions, a strong supply chain within oil and gas and supportive public policies such as enhanced support for floating offshore wind pilot parks under the Renewables Obligation (Scotland),” Statoil said in a statement.