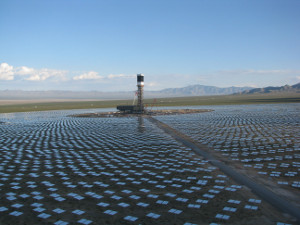 An Australian concentrating solar power (CSP) installation has become the first solar project to generate supercritical steam, the scientific team behind it has announced.

Researchers at the Commonwealth Science and Industrial Research Organization (CSIRO) reported that their Advanced Solar Steam Receiver Project had created a control system with the ability to accurately recreate the necessary temperature and pressures to produce supercritical steam – the high-pressure, superheated steam used in the modern, highly efficient fossil-fueled power plants which have outperformed solar to date.

The CSP installation’s 600 heliostats (movable mirrors) then generated steam at the highest levels of temperature (over 570°C) and pressure (23.5 MPa) ever recorded with solar power, CSIRO said.

“When you take into consideration that this is the first time solar power has ever been used to create these ‘supercritical’ levels on this scale – traditionally only ever reached using the burning of fossil fuels – the real worth of this achievement begins to sink in,” CSIRO said in a statement on its website, while industry analysts called the breakthrough a significant advance in ensuring solar power’s long-term future.

CSIRO’s AUD$5.68m (US$5.3m) research programme is supported by the Australian Renewable Energy Agency (ARENA), and is part of a collaboration with Abengoa Solar.