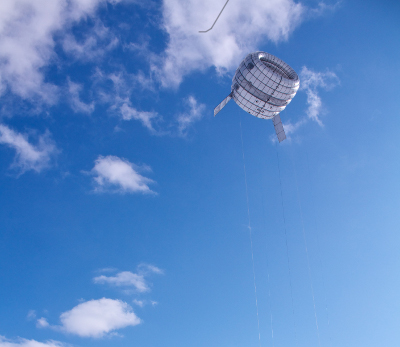 The investment will support commercial development of Altaeros’ Buoyant Air Turbine (BAT), in which a shell filled with helium floats a wind turbine 1000-2000 feet (300-600 metres) above the ground.  According to US-based Altaeros, the ability to harvest stronger winds at higher altitudes means the BAT is expected to generate over twice the power of a tower-mounted wind turbine of the same size.

Masayoshi Son, Softbank chair and CEO, said in a statement that “Altaeros’ airborne wind turbine technology is a new and promising renewable energy solution for remote islands and locations in Japan and the Asia‐Pacific region.”

Altaeros says the BAT is adapted from tethered aerostats, which are useful for lifting heavy communications and monitoring equipment into the air. The wind turbine is kept in place by a lightweight tether anchoring it to the ground and transmitting power, and a portable ground station deployed from a shipping container holds the control system.

Softbank is Japan’s second largest wireless internet provider and the BAT could prove useful in offering internet services to remote locations. Son added: “We also believe in the BAT’s potential to create new businesses by combining it with communication and surveillance technologies.”

Adam Rein, Altaeros’ co-founder, said: “Since telecommunications is an important hybrid service of our product, having a partner like SoftBank that is a leader in telecommunications is a very good fit for us, particularly since our focus is expanding our services to remote or off-grid island regions that aren’t well-serviced today.”