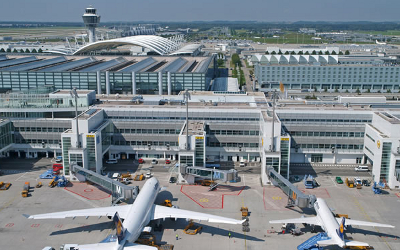 Munich airport is benefiting from one of the most economical and efficient combined heat and power plants in its class, in the running of what is one of Europe’s top ten busiest airports.

The plant is acknowledged as making a significant contribution to the avoidance of CO2 and is equipped with seven MWM diesel engines of the TDBG441BV16 series with an output of 1,580 kWel and approx. 1,800 kWth each.

The reduction in carbon dioxide emissions ” compared to conventional electric power ” is some 30,000 tons per year. This enables the total CO2 emissions of the daily commuter traffic of 30,000 people who work at Munich Airport to be offset.

In the course of the airport expansion of an additional terminal (2) in the year 2002, the energy control center was enlarged by two CHP plants. For this project, MWM delivered two gensets with TCG632V16F engines that went into operation in mid-2002.

The units have an output of 3.7 MWel each and approx. 4.6 MW thermal, meaning in total that the airport has approx. 18.5 MW electrical and approx. 20.5 MW thermal output available.

More than 50% of the Electricity Demand is generated on site, while 52% of the electricity required by the airport and 72% of the heat are generated by the combined heat and power plants on site.